Rasa - Saudi Foreign Minister Adel al-Jubeir has made a rare visit to Baghdad as the first by a high-ranking Saudi official since the US-led invasion of Iraq in 2003. 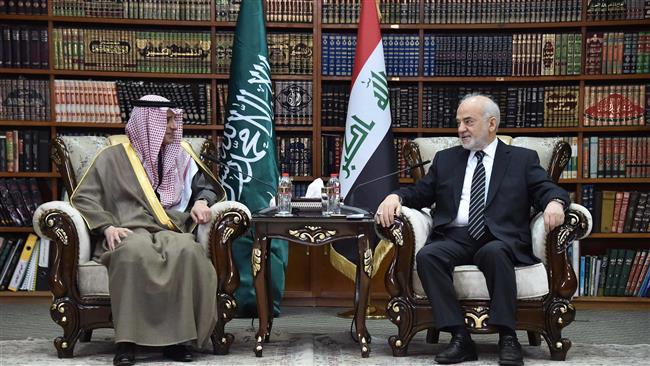 The two sides “discussed cooperation in various fields, including the fight against the Daesh gangs,” the statement added.

It added that Jubeir “congratulated Iraq on the victories achieved against Daesh and pledged Saudi Arabia's support to Iraq in fighting terrorism."

Jaafari has been considered an outspoken critic of Saudi Arabia and has issued several strongly-worded statements against the kingdom over what he called Riyadh’s "unacceptable interference” in Iraq.

Meanwhile, an Iraqi Foreign Ministry official said that Jubeir told Iraqi officials that the kingdom planned to appoint a new ambassador to Baghdad.

In January 2016, Thamer al-Sabhan became the first Saudi Ambassador to Baghdad in a quarter of a century, after the two countries severed ties following former Iraqi dictator Saddam Hussein's 1990 invasion of Kuwait.

In August 2016, senior Iraqi officials requested Riyadh to replace Sabhan. Pro-Riyadh news outlets had earlier alleged that fighters from Popular Mobilization Units, an Iraqi force comprising anti-terror volunteer fighters, had devised plots to murder the Saudi envoy. Back at the time, the Iraqi Foreign Ministry dismissed the reports, saying such claims were only meant to damage relations between Baghdad and Riyadh.

Sabhan had on occasions received warnings from Iraqi officials for interference in the country’s internal affairs. In June, Abadi himself strongly advised Sabhan to remain committed to his diplomatic duties only and to avoid meddling in Iraq’s domestic affairs.

Riyadh withdrew the ambassador, but instead of naming a new ambassador, Saudi Arabia seconded Abdulaziz al-Shammari as chargé d’affaires at its diplomatic mission in the Iraqi capital, in what was regarded as a unilateral downgrading of diplomatic ties with Iraq.

In October, Iraqi Foreign Ministry said a Saudi individual had hacked its website, putting offensive, sectarian-charged content on it.

The cyberattack came only a day after the ministry reacted harshly to earlier remarks by Jubeir, who had said in the run-up to the Mosul offensive that Baghdad should not enlist the Popular Mobilization forces in its push to liberate the northern city from Daesh.

The fighters have proven a pivotal force in extricating the country from the clutches of the terrorists, who have been ravaging it since 2014.

Tags: Iraq Saudi
Short Link rasanews.ir/201nFx
Share
0
Please type in your comments in English.
The comments that contain insults or libel to individuals, ethnicities, or contradictions with the laws of the country and religious teachings will not be disclosed