Rasa - The Syrian Army troops continued their operation in the Southern outskirts of Deir Ezzur city to remove ISIL's siege on the military airport and managed to win back a key height in the cemetery region. 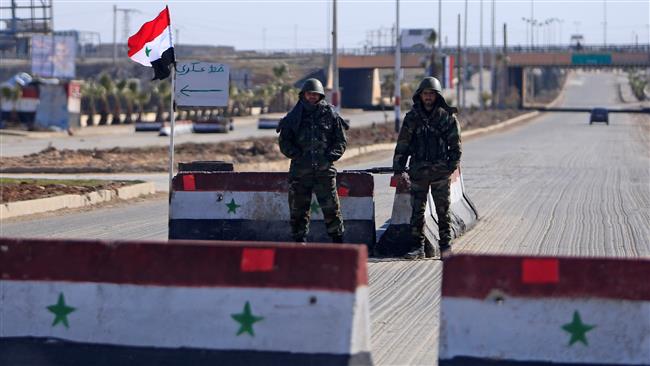 RNA - The Syrian Army troops continued their operation in the Southern outskirts of Deir Ezzur city to remove ISIL's siege on the military airport and managed to win back a key height in the cemetery region.

The Syrian Army troops continued to beat back ISIL from more territories in Eastern Aleppo, taking full control over one more village North of the terrorist-held town of Deir Hafer.

The army soldiers, backed up by the country's military helicopters, engaged in fierce clashes with ISIL and managed to win back the village of al-Mazwireh North of the newly-liberated town of Tayara Mazi (al-Ma'azah).

Also in the past 24 hours, the Syrian Army troops backed by the country's air force and missile units continued to advances against ISIL in Eastern Aleppo and could drive terrorists out of more villages, inflicting major losses on the militants.

The army men engaged in fierce clashes with ISIL in a region between Kuweires airbase and Deir Hafer town and seized back the villages of Rasm al-Wali and Rasm al-Harmal.

Also on Thursday, the latest reports from Syria said that tens of terrorists have been killed and tens of others have been injured in fierce clashes between the Turkey-backed militants and two other rival groups near the town of Azaz in Northern Aleppo.

Informed sources in the region said that clashes have intensified between the Ankara-backed militants of Sultan Murad group with Ahrar al-Sham and al-Shamiyeh Front near the Sajou camp three kilometers North of Azaz.

The sources added that a number of militants have been killed and wounded from both sides, while a large number of people have fled the camp to save their lives.

Media sources close to the terrorist groups disclosed on Wednesday that Turkey ordered its affiliated militants that operate under Ankara's Euphrates Shield Operation to leave the key town of Azaz in Northern Aleppo to be replaced by the Turkish army soldiers.

The sources said that Ankara was paving the ground for deploying dozens of Turkish army units in Azaz, adding that Turkey gave two weeks to its affiliated militants in the Euphrates Shield operation to evacuate Azaz.

The sources confirmed that Turkey urged its affiliated militant groups to pull out all troops from Azaz and hand it over to the Turkish army.

The Syrian army troops continued to hit ISIL's positions hard along a road running from the Southern outskirts of Deir Ezzur to the city's airbase a few kilometers away, inflicting a number of casualties on the terrorists.

The army unit engaged in a tough battle against ISIL in al-Maqaber (Deir Ezzur's cemetery) and could drive terrorists out of more positions along the road that connects the city's residential areas to the besieged military airport.

The army soldiers destroyed several military vehicles of ISIL and imposed control over a hill overlooking terrorists' positions along the road to Deir Ezzur's airbase.

A military source said meantime that the army aircraft targeted ISIL's gatherings and movements in the neighborhoods of al-Ma'amel, Cemetery, al-Thardah mountain, al-Mohandesin, al-Hosseiniyeh, al-Hamidiyeh, al-Omal, al-Huweiqa, al-Rashediye, al-Jabileh and in the town of al-Sowar near Deir Ezzur's provincial border with Hasaka, killing and wounding a large number of terrorists and destroying several vehicles.

Also on Thursday, the Syrian army troops continued their operation in the Southern outskirts of Deir Ezzur city to remove ISIL's siege on the military airport and managed to take control over a key height in the cemetery region.

The army soldiers engaged in heavy fighting with ISIL in Deir Ezzur's cemetery in the Southern outskirts of the city and won back Height 23 that overlooks the regions of Sakhra Makbat al-Kanasa and al-Thardah valley South of the cemetery.

A field source reported heavy casualties of ISIL terrorists near the Height 23, adding that the army men are fortifying their positions around the newly-liberated region.

Media sources said that ISIL's attack on positions of a group of terrorists affiliated to the Free Syrian Army (FSA) in the Southern province of Dara'a left at least 100 FSA militants dead and many more wounded.

Sources in Southern Syria revealed on Tuesday that infighting intensified between ISIL-affiliated militants and their rival terrorists from the FSA in the Western countryside of Dara'a, leaving over 70 militants dead mostly from the FSA.

The sources said that militants of Jeish Khaled stormed the positions of Liwa Shohada al-Horiyeh and Ferqah al-Haq affiliated to the FSA in Hawz Yarmouk and managed to take control of Tal (hill) Majmou and the towns of Saham al-Joulan, Tasil, Adwan and Jalin.

Over 50 fighters from Liwa Shohada al-Horiyeh and Ferqah al-Haq were also killed in the clashes, added the sources.

Al-massdar said that 70 militants from both sides were killed in the infighting in Dara'a but most of them were from the two FSA-linked terrorist groups.

Syrian army troops, backed up by the country's fighter jets, continued to attack ISIL's defense lines in Eastern Homs, taking control over more territories in the Western countryside of the terrorist-held city of Palmyra (Tadmur).

The army soldiers engaged in an intense battle with ISIL West of Palmyra and managed to take control over the villages of Tarfeh al-Qarbi and Tarfeh al-Sharqi near al-Douh region.

Field sources said that the army men also clashed with ISIL from areas near Qasr al-Hayer al-Qarbi up to Khan al-Halabat region South of Palmyra, and could advance against terrorists.

The sources said that simultaneous with the ground forces' advances, the army aircraft launched heavy airstrikes on ISIL's movements and concentration centers in Badiyeh (desert) al-Qarbi Southwest of Palmyra, killing a number of militants and destroying their equipment.

Another field source said that ISIL has been pulling back its forces from the surrounding of Palmyra after the Syrian armed forces' large-scale operation kicked off in Eastern Homs.

Also in the past 24 hours, the Syrian army and air force pounded and destroyed several command centers and arms depot of al-Nusra Front (recently renamed to Fatah al-Sham Front) in the Northern part of Homs province, killing a number of the terrorists group's foreign commanders.

Several foreign commanders of al-Nusra Front were killed in the Syrian army offensives.

The Syrian fighter jets also pounded the concentration centers and movements of the terrorists in Um Sharshouh, al-Qajar, al-Sa'an and the surrounding farms of Talbiseh in Northern Homs, killing and injuring several terrorists.

Syrian army troops and Air Force carried out a fresh round of joint attacks on terrorist groups in Southern Idlib and Northern Hama, killing and wounding more than 150 militants.

The army soldiers, backed up by warplanes, stormed terrorists' gatherings in the villages and towns of al-Zakah, Kafr Zita, al-Jaberiyeh, al-Qazal, al-Tounyeh, Latibeh, Hish, Khan Sheikhoun and Khan Sheikhoun-Sayad road, killing over 70 militants and wounding 80 others.

A field source said that a Bara'a Hallaq known as Abu al-Yazid Taftnaz, a commander and media chief of the newly-formed Tahrir al-Sham Haya'at (the Levant Liberation Board) was killed in the Syrian air raids in Hama.

Also on Thursday, Syrian army troops and Air Force targeted heavily the positions of Ahrar al-Sham and Jund al-Aqsa in Northern Hama after the terrorist groups' missile units started attacks on residential areas in the town of al-Saqilbiyeh.

Missile units of Ahrar al-Sham and Jund al-Aqsa started shelling residential areas in al-Saqilbiyeh after the army men fended off two offensives of them in a region between Bridij and al-Moqayer in Northern Hama and managed to kill or injure over 150 terrorists.

Further in a retaliatory move, the army units targeted the position and movements of terrorist groups in the town of al-Banah and Tal Othman region, killing and wounding tens of militants.

In the meantime, the army aircraft carried out several rounds of combat flights over terrorist groups' concentration centers in the village of al-Janabareh and near Tal (hill) Othman, inflicting several casualties on the terrorists.

The predominantly Kurdish Syrian Democratic Forces (SDF) continued the third phase of the Euphrates Rage Operation in Raqqa province and drove ISIL out of six more villages in the region.

The SDF combatants deployed in the nearby regions of the village of Bir Haba (Bir Haba battlefield) engaged in bloody clashes with ISIL and pushed them back from the villages of Hamidi and Qareh.

Also, the Kurdish fighters in the village of al-Makman stormed ISIL's defense lines and seized control over the villages of Jarwan, Qandili Sherki, Mahbash and Abu Jandal.

In the meantime, SDF fighters in Bir Haba and al-Makman battlefields met other friendly units at their rendezvous point and laid siege on several ISIL-held farms and villages.

Tags: Hama Syria ISIL Homs Aleppo
Short Link rasanews.ir/201nFh
Share
0
Please type in your comments in English.
The comments that contain insults or libel to individuals, ethnicities, or contradictions with the laws of the country and religious teachings will not be disclosed