Rasa - After a full liberation of Mosul, Iraq needs to dispatch its troops to the border with Syria, Turkey and Saudi Arabia to prevent terrorists from returning to the country, a US-based journalist says. 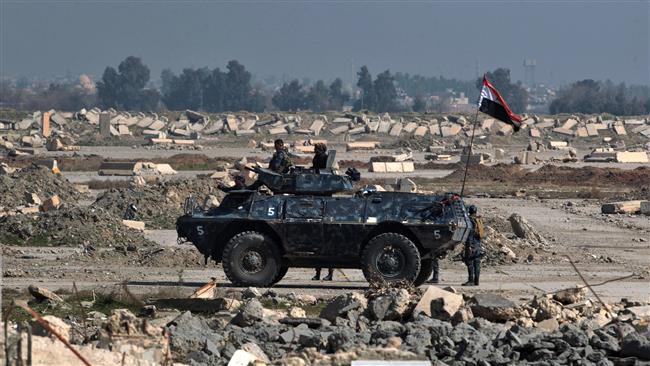 RNA - “They have to make sure they have tight control over their borders; so [terrorists] cannot be flowing back in from Syria,” ​Jim W. Dean, managing editor of Veterans Today from Atlanta, told Press TV on Thursday night.

Daesh terrorists have started fleeing into Syria but Dean said if the Takfiri stronghold of Raqqah in Syria falls, the militants are going to be flooding over the border.

“The same would be for Saudi border; so, getting really tight control over your borders, so these people can just not wander around and bring truckloads of arms and smuggling in” is important, he added.

If the Iraqis fail to control their borders with Syria, Turkey and Saudi Arabia, “they’re never going to be in control of their country,” Dean warned.

Once Mosul is taken care of, there is going to be a big change in Iraq, because that’s going to free up a lot of the Iraqi troops and they could be dispatched to Syria if needed to help the Damascus government fight terrorism, Dean speculated.

Since October 2016, Iraqi forces have been trying to liberate Mosul, which is the second biggest city in the Arab state. Defeating the Daesh in Mosul would deal a crushing blow to the Takfiri group, which occupied areas in northern and western Iraq in 2014.

The military advancements in Mosul are going to be “a big boost” to the Iraqi army and the country as a whole, Dean said. He said Iraqi armed forces have realized that the only solution for the terrorists is to defeat them so that they cannot escape.

However, he went on to say, "the menace of terrorism could not be dealt with seriously if there is too much emphasis on eliminating Daesh alone without eliminating the mechanism that initiated and supported it in the first place."

According to the expert, some members of the UN Security Council are aiding and abetting terrorist groups in the Middle East.

"Sovereign countries are suffering from terrorism because there are state sponsors of terrorism and they have immunity in international arena," he said.

Edward Peck, former US ambassador to Iraq from Washington, said the push for Mosul “would be a feeling of uplift on the side of the Iraqi government itself."

He said Iraq is facing disintegration because outside players like Turkey and Saudi Arabia are trying to advance their interests in the war-stricken Arab country. Peck hoped consensus for stabilizing Iraq would be attainable in the future.

The former ambassador touched on reports that the US military was assisting extremists through airdrops of weapons which ended up in the hands of the Takfiri terrorists.

“Once you send weapons in an area like that ... it can fall into the hands of people who are still existing in territory that was earlier liberated and could cause problems,” he said.

In an interview with German newspaper Koelner Stadt-Anzeiger in 2016, al-Nusra Front commander Abu Al Ezz said US weapons were being delivered to the group by the states which were supporting militants in Syria.

Pointing to foreign military presence in Iraq, Peck warned that the involvement of foreign forces in the Iraqi conflict “complicates the problems enormously.”

Tags: Turkey US Mosul Iraq Saudi
Short Link rasanews.ir/201nFY
Share
0
Please type in your comments in English.
The comments that contain insults or libel to individuals, ethnicities, or contradictions with the laws of the country and religious teachings will not be disclosed