US Is Spreading the Blind War Against Life Itself in Syria

Rasa - The distressing images of desperate Syrian refugees still making the treacherous journey across the Mediterranean Sea and the Balkans to escape the war show how complicated the preconditions to achieve social harmony and peace in that shattered country are. 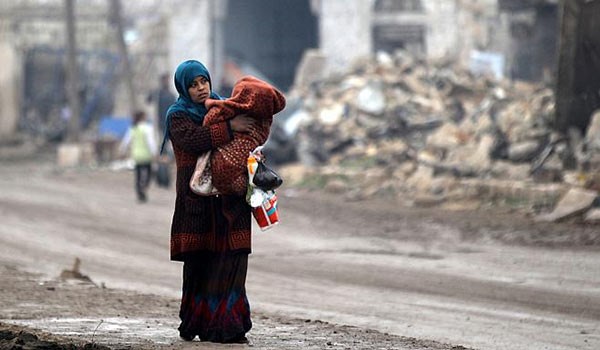 RNA - This humanitarian crisis is the result of years of freewheeling War-on-Terror campaign with no concern for security in Syria and elsewhere in the Middle East. One of its consequences is security upheavals and mass exodus. All the reason why Central Command Chief Gen. Joseph Votel is mistaken to plan new chaos by sending even more US troops to command in Syria. It could easily escalate the conflict and send more Syrian refugees to Europe in the coming spring.

Sadly, reports out of the Pentagon suggest this is likely to be the decision of their deliberation on war recommendations, which has also been repeatedly suggested by President Donald Trump, i.e., an accelerated campaign in Syria with a large deployment of US combat troops - complemented with the establishment of no-fly zones of course. Much of this appears (emphasis here) to be centered on the desire for the US to capture the self-declared ISIL capital city of Raqqa, and their announced offensive against Raqqa which began months ago, with Kurdish YPG forces leading the way. But this has not resulted in much strategic territory changing hands, much less dislodging the terrorist group from its main strongholds in the region.

The plans reportedly in consideration include substantial increases to US arms shipments to the Kurds and bringing in some Al-Qaeda-linked “moderate” rebels to prop up for the attacks too, a move which would doubtless worsen the current humanitarian crisis.

The escalation and proliferation of the foreign-backed war undermines the well-being of the war-ravaged Syrian communities. According to the United Nations High Commissioner for Refugees, more than 4 million people have left Syria owing to the continued violence. The majority of them live now in shelters and camps as internally displaced persons, while others are scattered throughout the region in countries such as Turkey, Lebanon and Jordan. The world has not witnessed mass exodus of this proportion since the end of World War II.

The escalation, the deliberate structural violence, and the forced displacement are in contradiction with the vision expressed by the 1986 Declaration on the Right to Development, which was adopted by many countries, including the United States. The negative impact of the new plans to send more US troops to Syria tramples both human rights to life and to development.

Whatever one's own preferences, arming various terrorist groups on the pretext of “moderation”, “support for Syrian democracy”, or “war on ISIL”, which is a supremely primitive instrument of the civil-war strategy, gives rise to ethnic and inter-racial tensions that destabilize the already shattered societies. It’s a pretext to murder and destroy, yet another example of the society-wrecking pattern at the state level.

ISIL today continues it at a more diabolical extreme - originally funded and armed by the very US-led coalition members now dropping bombs on it in Syria. Israel even gives ISIL and Al-Nusra beheaders hospital service after Mossad and the CIA trained them as a largely ex-Saddam jihad army. All of this seems quite insanely contradictory. But all promotes civil wars, further American military presence, and rendering peoples helpless against foreign money control and occupation - in places not yet subjugated to transnational corporate control.

This is not “yet another conspiracy theory”. It’s just a reminder how a desert-crawling line of Japanese open-back trucks gifted by the US filled with countless irregular fighters in plain view could easily make it overnight to the point where Western military and political leaders are now saying “the war against ISIL is endless”, “we will stay here for the time being”, and “it will take time to retake Mosul”.

Seeing through the game, ISIL is a colonial project financed and trained by US, Israel, and Persian Gulf Arab monarchies to ruin every place it enters. For them, Al-Qaeda was never enough. ISIL is a step up in the US-led control of the Middle East by terror, chaos and social devastation.

Best of all, the ruling foreign war machines of the US, Israel, Saudi Arabia and NATO are now far better justified to dictate and destroy. They are blaming Iran and Russia, or worse, the oppressed for what they are doing. Without showing any sense of shame and remorse, they are even projecting the sectarian “Shiite” labels on the popular uprising of the poor in Yemen against a corrupt US-Saudi puppet regime.

One object alone is achieved though: Peoples of the region can be silenced by drones, unending murder, mayhem and terror in imposed civil wars; and resources of the region can then be predated without sovereign social defenses or unity of collective life purpose - the ultimate target of every US-led aggression and regime-change campaign. As long as this is the program and there is no exception to it, Syria, Iraq, Yemen, and Libya will never see their elected governments able to fully execute their functions in the interest of their citizens, let alone positively affect the enjoyment of basic human rights.

Tags: US Syria
Short Link rasanews.ir/201nFP
Share
0
Please type in your comments in English.
The comments that contain insults or libel to individuals, ethnicities, or contradictions with the laws of the country and religious teachings will not be disclosed