Rasa - The 6th International Conference in Support of the Palestinian Intifada (Uprising) issued a final statement urging the need for putting an end to seven decades of Israeli occupation. 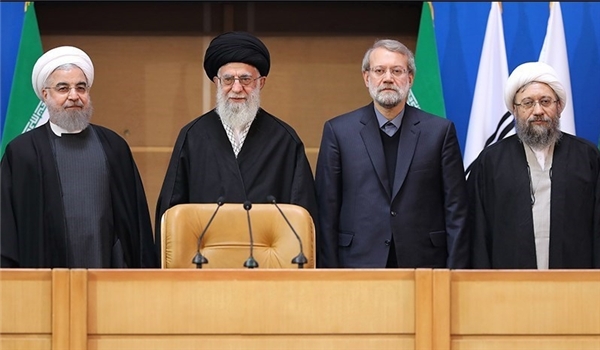 RNA - The statement underlined the need for collective efforts of all Muslim countries to defend legitimate rights of the Palestinian nation.

Parliament speakers, resistance leaders, intellectuals and political, cultural and media activists from different countries participated in the two-day conference in the Iranian capital.

The annual event, dubbed as the 6th International Conference in Support of the Palestinian Intifada (Uprising), continued for a second and last day in Tehran on Wednesday morning with the motto of “Together Supporting Palestine.”

Around 700 foreign guests from dozens of countries and representatives of pro-Palestinian organizations took part in the conference.

In an opening speech, Leader of the Islamic Revolution Ayatollah Seyed Ali Khamenei said all Muslim countries have a responsibility to support the Palestinian resistance, as the myriad of UN resolutions that explicitly recognize the legitimacy of the people’s struggle for liberation from foreign domination by all available means only strengthens the legal basis for the Palestinians’ right to resist.

Ayatollah Khamenei added, “Despite the differences that exist among Islamic countries - some of these differences are natural, some originate from the enemy’s plot and the rest are because of negligence - the issue of Palestine can and should be the pivot of unity for all Islamic countries. The top priority of the Islamic world and all those fighting for freedom across the world is the Palestinian cause and unity to support that cause.”

2- The Israeli ban against demonstrations is but one example of the hundreds of military orders that strip the Palestinians of autonomy and illustrate just how far the regime extends. Palestinians must learn that passively accepting an unjust, apartheid system is to cooperate with that system, and thereby to become a participant in its evil. They must remember that the wind eventually wears away the stone, because the stone can only crumble; the wind can change.

3- The participants of the conference criticized all rounds of so-called peace negotiations that had taken place between the Palestinian Authority and Israel as “a waste of time and effort,” stressing that Israel is the biggest beneficiary of such talks. Israel takes advantage of the talks to dwarf the Palestinian people’s rights and portray to the whole world that the peace process is ongoing with the occupied people of Palestine. Palestinians are now experienced enough to realize that talks are not only useless, but have negative repercussions for them galore.

4- It is hopeless for the Palestinians to seek diplomatic help from the United Nations where the United States always vetoes any resolution critical of Israel. The world is still in shock and dismay over the intention of the UN Secretary-General Antonio Guterres to consider former Israeli foreign minister Tzipi Livni as his deputy despite her role in massacring many innocent people in Gaza. Palestinians should slam Guterres for considering a war criminal who blatantly declares her disregard for International Law.

5- Palestinians’ legal right to resist occupation, to fight for their ability to promote, sustain, and nurture human life, to fight for their right to grow and flourish, and to return to their motherland comes from two documents: The 1960 Declaration on the Granting of Independence to Colonial Countries and Peoples and the Fourth Geneva Convention and its subsequent protocols. They have the right to fight against colonial domination and alien occupation in the exercise of their right to freedom, democracy, and self-determination.

The document legitimizes also national liberation struggles, including, at this time in history, the Palestinian people’s struggle for freedom. It is the same right that also legitimizes the organizing of the annual international conference on Palestine in Tehran. It is an attempt to get the international civil society together to support the Palestinians in lifting the yoke of Israeli oppression from the Holy Land.

It classifies the US-backed Zionist regime’s army actions as "state sponsored terrorism" as well. The gathering was not a selective reading in International Law, but a highlight of relevant UN resolutions that Israel and its patrons in the United States and Europe often disregard. The ongoing process of dehumanization carried out by Israel, using the American media, made this year’s conference more than ever relevant and well-timed. In these difficult times, Palestinians do indeed need help to practice their right to defend themselves against the brutal Israeli occupation, especially when the Western world and the Persian Gulf Arab monarchies have failed them.

This year’s conference boiled down to this: The right to resist oppression and occupation is universal. It is the same right that justified the American Revolution, the French Revolution, and the revolutions and wars of liberation in the 1950’s, 1960’s, and 1970’s. It is therefore the moral duty of us all to think historically, critically and compassionately about the apartheid in Palestine, and heed the words of Ayatollah Khamenei: As long as the name and memory of Palestine and resistance are preserved, it will be impossible for the Israeli regime to strengthen its foundations.

Tags: Iran Israel Palestin
Short Link rasanews.ir/201nFO
Share
0
Please type in your comments in English.
The comments that contain insults or libel to individuals, ethnicities, or contradictions with the laws of the country and religious teachings will not be disclosed