Rasa - Two dozen protesters were arrested by police in Anaheim, California, during a rally attended by hundreds of people calling for the arrest of an off-duty white police officer who fired a gun during a scuffle with a Hispanic teenager. 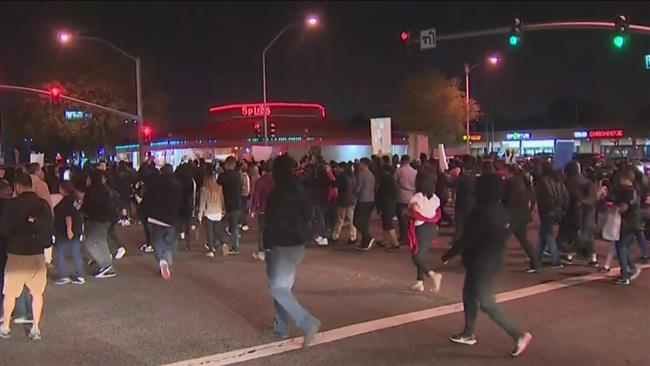 RNA - The shooting by the Los Angeles police officer that ignited Wednesday’s protest occurred the day before and was captured on a cell phone video. Nobody was wounded in the shooting.

Some of the 300 protesters threw rocks at police officers in riot gear, kicked police cars and blocked intersections as they marched and chanted "don't shoot the kids" and "whose streets, our streets" on Wednesday night, the Los Angeles Times reported on Thursday.

Police said 24 people were arrested for "misdemeanor charges including failure to disperse.”

The Los Angeles Police Department (LAPD) said it has launched an internal investigation into the officer's actions but insisted the confrontation "began over ongoing issues with juveniles walking across the officer's property."

"Like many in the community, I've seen the video and I'm very concerned about what it shows," Anaheim mayor Tom Tait said in a statement. "Anaheim is committed to a full and impartial investigation. Our city will move forward without delay."

The altercation began Tuesday afternoon outside the officer's house after a group of juveniles walked across his property, the Anaheim Police Department said in a statement.

The Anaheim Police Department said the off-duty officer detained a 13-year-old boy after he allegedly threatened to shoot him, leading to a physical confrontation with other juveniles. The officer then discharged his firearm once.

The Southern California branch of the American Civil Liberties Union (ACLU) said the civil rights group is "deeply disturbed" by reports and demanded "a full explanation of why, in an altercation between the police officer and youths, the youths were arrested but not the officer who fired his gun."

The incident comes amid a debate in the United States over the role of police officers and their use of sometimes deadly force against minorities. US police officers fatally shot nearly 1,000 people last year, amounting to three deaths each day, according to an investigation by The Washington Post.

Tags: US California protest
Short Link rasanews.ir/201nFI
Share
0
Please type in your comments in English.
The comments that contain insults or libel to individuals, ethnicities, or contradictions with the laws of the country and religious teachings will not be disclosed