Rasa - Russian President Vladimir Putin says his country has no plans to interfere in Syria's internal affairs and its aim is to stabilize the legitimate government in the Arab country which is battling terrorists. 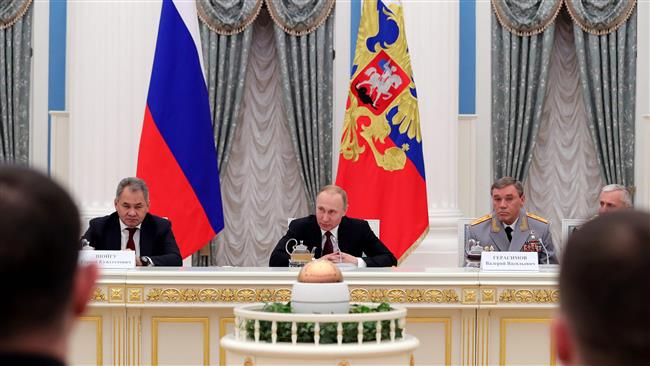 RNA - "Our task is to stabilize the legitimate authority in the country and strike a decisive blow against international terrorism," Putin said at a Thursday meeting in Moscow with officers returning from combat in Syria.

The Russian leader further expressed hope for the success of a political settlement in Syria, saying it will help defeat the "terrorist malaise."

"The sooner the country reaches a political settlement, the better the chances for the international community to put an end to the terrorist plague on Syrian territory," he said.

Putin hailed the role played by the Russian naval forces in combating terrorism, singling out the Northern Fleet, which includes Admiral Kuznetsov aircraft carrier group, and was deployed to the Mediterranean off the Syrian coast.

“You have fulfilled all the tasks that were given to you and inflicted significant damage to the international terrorist groups by hitting their bases, ammunition storages, equipment, and infrastructure,” he said.

Moscow's military deployment to Syria has "contributed directly to Russia's security," Putin said, warning of an "enormous risk" posed to Russia by the foreign members of the Daesh terrorist group.

According to Russian intelligence services, some 4,000 Russian citizens and 5,000 citizens from the former Soviet Union are fighting within Daesh ranks in Syria, Putin said.

Moscow launched its campaign against Daesh and other terror outfits in Syria at the request of the government in Damascus.

In January, Moscow withdrew its naval force from Syrian waters, including the Admiral Kuznetsov aircraft carrier, as part of a reduction of its military role in the Arab country.

Putin said the Russian military has “helped to create conditions for the peace talks between the Syrian government and the armed opposition.”

Tags: Syria Putin Russia
Short Link rasanews.ir/201nFH
Share
0
Please type in your comments in English.
The comments that contain insults or libel to individuals, ethnicities, or contradictions with the laws of the country and religious teachings will not be disclosed