Withdrawal of Israelis from Palestine only solution to crisis

Rasa - Israeli occupiers must withdraw from the Palestinian lands to wherever they have come from, says Marwa Osman, a journalist and political commentator from Tehran. 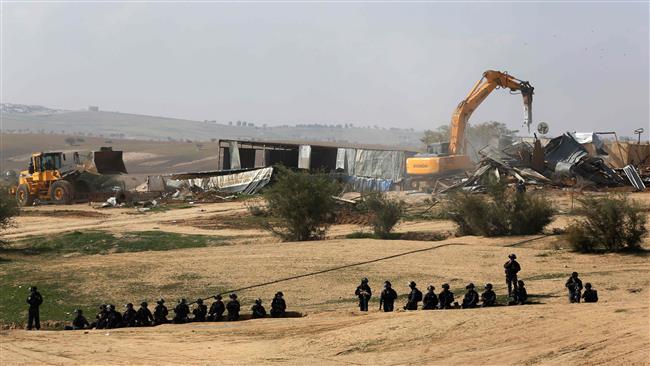 RNA - “The only way, we could get away from all the genocide, all the bloodshed that is going on in occupied Palestine is for all the Zionists… to leave everything, because it’s not theirs,” Osman told Press TV’s The Debate on Wednesday night.

The Zionist occupiers must “go back to whatever European, Western Russian country they came from,” the analyst added.

During the 1948 Palestine war, the Israeli occupiers forced more than 700,000 Palestinian Arabs to leave their homeland. The Israeli regime occupied most of the lands of Palestine since then.

Osman said, “There is nothing called Israel, it is the Zionist entity, it’s the most racist entity that has ever been on the face of this earth even more racist than the Nazis themselves, it has been committing genocide against Palestinians ever since they’ve set foot in the sacred land of Palestine and decided to steal the land and steal the resources and call it their ‘holy land’.”

Palestinians who are living in the occupied territories, the West Bank and the Gaza Strip are suffering discrimination, unlawful incarceration, demolition of their homes and killings on a daily basis.

Dismissing the notion that Palestinians and Israelis are engaged in a conflict, she said, “It is not a conflict, it is an Israeli occupation on an Arab land, on the Palestinian land and it is a genocide that is going on in Gaza.”

“There was a Holocaust and this was a terrible act in history but this does not give the right for the Israeli entity to do the same and even worse to the people of Palestine,” she noted.

Meanwhile, Richard Millet, a journalist and political commentator from London, said that Palestinians and Israelis need to negotiate to reach a consensus on their future political situation.

“Israel is tiny but Israel wants to live in peace with the Palestinian people but any way to get that is ... to be negotiations,” he argued.

According to Millet, there have been peace negotiations between Israelis and Palestinians, but they could not go on because of the broader conflicts in the Middle East.

The journalist put the blame on Iran for the Middle East unrest, claiming that Iranians’ support for the resistance movements in Palestine and Lebanon is the source of unrest in the region.

On Tuesday and Wednesday, Tehran hosted a confab, dubbed the 6th International Conference in Support of the Palestinian Intifada (uprising), to show support for the Palestinian people.

The Israeli regime has defied international calls for halting the construction of illegal settler units in the occupied territories. The new US administration has expressed all-out support for Israelis' illegal activities.

Palestinians started their third Intifada (uprising) in 2014, as they are furious with the settler violence and a plan by Israelis to change the status quo of the al-Aqsa Mosque, which is Islam’s third holiest site after Masjid al-Haram in Mecca and Masjid al-Nabawi in Medina.

Tags: Israel Palestin
Short Link rasanews.ir/201nFC
Share
0
Please type in your comments in English.
The comments that contain insults or libel to individuals, ethnicities, or contradictions with the laws of the country and religious teachings will not be disclosed