Rasa - The United Nations and the European Union have called on the Israeli regime to stop its plans to tear down an internationally-funded makeshift hospital and dozens of Palestinian residential buildings in the central part of the occupied West Bank. 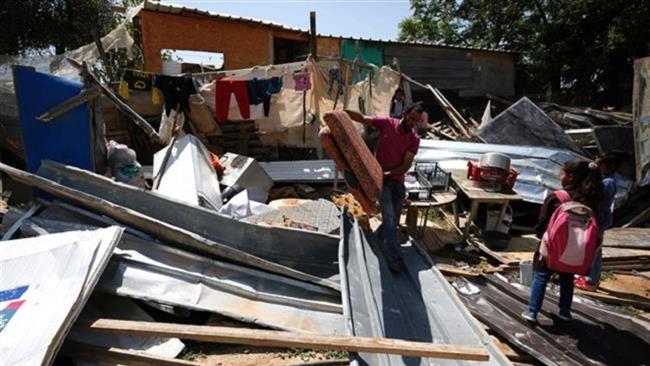 RNA - The Coordinator for Humanitarian Aid and UN Development Activities for the Palestinian territories, Robert Piper, and the Director of UN Relief and Works Agency Scott Anderson made the call on Wednesday during a visit to the West Bank village of Khan al-Ahmar.

The visit came days after Tel Aviv began bureaucratic proceedings to demolish the entire village. There are some 35 families living in temporary shacks and sheds in al-Khan al-Ahmar. There are some 140 structures there, according to the world body.

“Khan al-Ahmar is one of the most vulnerable communities in the West Bank, struggling to maintain a minimum standard of living in the face of intense pressure from the Israeli authorities to move to a planned relocation site. This is unacceptable and it must stop,” Piper said.

He added, “Thousands of families live in fear of demolitions at any moment, and entire communities exist in chronic instability. When schools are demolished, the right to education of Palestinian children is also threatened. This creates a coercive environment that forces certain Palestinian communities to move elsewhere.”

The UN official further urged the international community to help protect the vulnerable Palestinian communities and make sure “international law is respected.”

For his part, Anderson warned that the Israeli regime is attempting to relocate Palestinian families currently residing in the Bedouin community, stressing that such a measure would amount to forcible transfer and eviction.

“The entire existence of this community, the homes, animal sheds and school that we visited today, is under threat. I am gravely concerned about Israel’s continued pressure to force these Bedouin from their homes, destroying their livelihoods and their distinct culture,” the UN official said.

“Many of these Palestine-refugee families have already had their homes demolished several times within the last couple of years. I urge the Israeli authorities to halt all plans and practices that will directly or indirectly lead refugees to be displaced once again,” Anderson pointed out.

It said the Israeli military has razed 135 Palestinian structures in Area C of the West Bank so far this year, displacing 218 Palestinians.

The Israeli army demolished 872 structures in Area C last year, leaving 6,088 Palestinians homeless. There were 1,663 children among those affected. The demolitions included EU-funded structures worth slightly more than €1 million, the EU mission pointed out.

The Area C of the West Bank is the largest division in the occupied territory as it comprises 60 percent of the land, and is under full Israeli military control.

“The EU calls upon the Israeli authorities to halt demolitions of Palestinian houses and property in accordance with its obligations as an occupying power under international humanitarian law,” the bloc said.

It also called on Israel to cease its settlement expansion activities.

Tensions have heightened in the occupied territories since August 2015, when Israel imposed restrictions on the entry of Palestinian worshipers into the al-Aqsa Mosque compound in East Jerusalem al-Quds.

More than 280 Palestinians, including children and women, have lost their lives at the hands of Israeli forces since the beginning of October 2015.

Tags: UN Palestinian Israel
Short Link rasanews.ir/201nFB
Share
0
Please type in your comments in English.
The comments that contain insults or libel to individuals, ethnicities, or contradictions with the laws of the country and religious teachings will not be disclosed