Rasa - Iran's Judiciary Chief Sadeq Amoli Larijani lashed out at the western countries, specially the US, for supporting the war crimes and human rights violations committed by Israel against the Palestinian people. 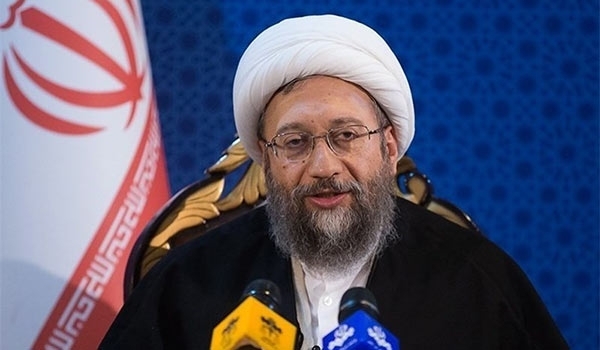 Noting that the international bodies, supported by the West, have themselves admitted Israel's war crimes, he said unfortunately, the western countries, specially the US, increase their support for Tel Aviv growingly.

"There is no shame more than this for the western states to chant human rights slogans and meantime support a regime which has committed war crimes," Amoli Larijani said.

The 6th International Conference in Support of the Palestinian Intifada is being held in Tehran on February 20 and 21.

Delegations from 80 countries have attended the conference to express solidarity with the Palestinian people.

Iran has, for a long time, given the highest priority to supporting Palestine and confronting the Israeli regime. The Islamic Republic, since it was founded, has held five international conferences in support for the Palestinian Intifada.

In relevant remarks on Tuesday, Supreme Leader of the Islamic Revolution Ayatollah Seyed Ali Khamenei underlined the necessity for the Muslim world to continue support for the Palestinian nation to liberate their homelands, and said the 3rd Intifada of the Palestinian people will defeat Israel again.

"With God's permission, the third Intifada will inflict another defeat on the usurper regime, and efforts to liberate Palestine should be a pivot for unity of all Muslim and freedom-seeking nations," Ayatollah Khamenei said, addressing the Conference.

He also referred to certain analyses saying that the resistance has not yet attained its final goal of liberating the entire territories of Palestine, and said this is right but resistance has been able to keep the Palestinian issue alive.

"The resistance has managed to impose a war of attrition on the enemy, meaning that it has been able to defuse the Zionist regime's main plot which was gaining control over the entire region," Ayatollah Khamenei added.

He underscored that had the resistance not crippled the Zionist regime, the world would have witnessed its expansionist policies against other regional states from Egypt to Jordan, Iraq, the Persian Gulf littoral states and others.

Ayatollah Khamenei also stressed that signs of the Zionist regime's collapse and weakness of its main allies, specially the US, are being witnessed now.

Tags: Israel Sadeq Amoli Larijani
Short Link rasanews.ir/201nEz
Share
0
Please type in your comments in English.
The comments that contain insults or libel to individuals, ethnicities, or contradictions with the laws of the country and religious teachings will not be disclosed