Rasa - The US military planes have helped the ISIL terrorists in Tal Afar region West of Mosul, eyewitnesses disclosed. 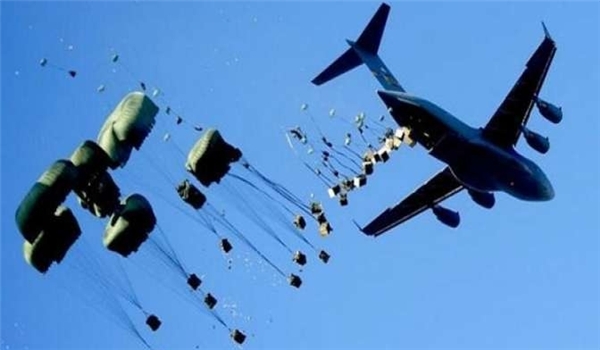 RNA - "We saw several packages dropped out of a US army aircraft in the surrounding areas of the city of Tal Afar in Western Nineveh province and six people also came out of a US plane in the ISIL-controlled areas," the Arabic-language media quoted a number of eyewitnesses as saying on Wednesday.

Tal Afar city has been under the siege of the Iraqi volunteer forces (Hashd al-Shaabi) for about two months now and the efforts by the ISIL terrorists to help their comrades besieged in Tal Afar have failed so far.

The news comes as the Iraqi army had reported that the US air force has been helping the ISIL terrorists in areas controlled by the terrorist group.

The Iraqi army says that the US army is trying to transfer the ISIL commanders trapped in areas besieged by the Iraqi army to safe regions.

In relevant remarks in late January, a senior commander of the Iraqi popular forces in Hamreen region disclosed that the US helicopters have helped the ISIL terrorists in Hamreen mountains in several nighttime operations during the past several weeks.

"It seems that the US troops are looking for a new scenario to disrupt the military operations in the city of Mosul through conflicts in Hamreen strategic mountains," the commander said.

Also in late January, the Iraqi volunteer forces (Hashd al-Shaabi) blocked the US soldiers' path to Mak'hul mountain in Northern Salahuddin and expelled them from the region once again.

The Arabic-language media reported that al-Nujaba Movement forces prevented the US army men from climbing Mak'hul mountain that is under the full control of Hashd al-Sha'abi and Iraqi security forces.

The al-Nujaba Movement noted that that the US soldiers and their armored vehicles intended to climb Mak'hul mountain but al-Nujaba forces pushed them back them from the region.

Also in January, the al-Nujaba Movement had also blocked the US army troops from climbing the same mountain.

In late October, Deputy Chief of the Nineveh Provincial Council Noureddin Qablan announced that the US-led coalition warplanes launched airstrikes on an army base in Nineveh province, killing several soldiers.

"The US fighter jets hit one of the military bases of Iraqi Army's 16th Division in a region North of Mosul, and the attack left four Iraqi soldiers dead," Qablan said.

He said that the US army confirmed the attack, calling it a "mistake".

Qablan said that it was not the first time the US warplanes hit the Iraqi army and volunteer forces' military positions, adding, "The US-led coalition has each time said that air raids were not deliberate."

Tags: ISIL Mosul Iraq
Short Link rasanews.ir/201nEv
Share
0
Please type in your comments in English.
The comments that contain insults or libel to individuals, ethnicities, or contradictions with the laws of the country and religious teachings will not be disclosed