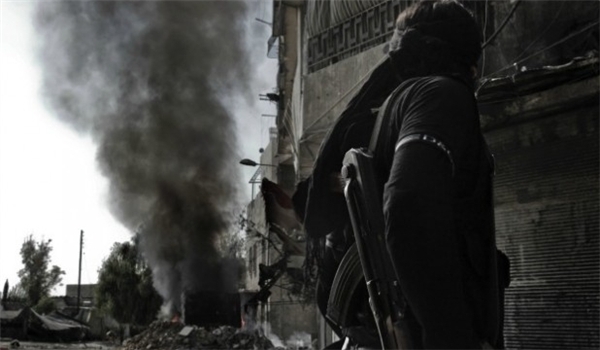 RNA - The Syrian army killed and wounded scores of terrorists as they engaged in heavy clashes with the militants in the Western countryside of the city of Aleppo.

Syrian Army troops continued their advances against Al-Nusra Front (recently renamed to Fatah al-Sham Front) in the Western countryside of Aleppo city, taking back more territories after inflicting major losses on the terrorists.

The army men pushed Al-Nusra terrorists back from more positions in Benjamin (Menyan) region West of Dhahiyah al-Assad neighborhood and won back Mansharah 1, 2 and Abu Omar settlements as well as al-Mantaj (resort) area.

Initial reports said the Al-Nusra Front has suffered heavy casualties in the attack.

In the meantime, the army's artillery units staged heavy fire on terrorists' positions and movements in Qabah al-Assad close to Dhahiya al-Assad.

Reports said earlier on Tuesday that the army troops started a fresh offensive against terrorist groups in the Western countryside of Aleppo and managed to win control over a key bridge, cutting off militants' line of supply.

The army soldiers carried out a retaliatory offensive from Dhahiyah al-Assad neighborhood towards al-Sowrah defense station in reaction to terrorist groups' mortar shelling of residential areas in the neighborhoods of Jam'iyat al-Zahra and New Aleppo in the Western part of Aleppo city.

The army men could significantly advance against terrorists and seized control over the strategic al-Raqqa bridge after hours of clashes.

A military source said that al-Raqqa bridge was one of the main supplying lines of the terrorists deployed in the Western countryside of Aleppo city.

The source added that the army soldiers have been engaged in heavy fighting with terrorists and are carrying out cleansing operation in the region to hunt the rest of the terrorists after establishing full security to al-Raqqa bridge.

The Syrian Army troops engaged in fierce clashes with terrorists in Southwestern Homs and managed to repel their attack on government forces' positions, inflicting a number of casualties on them.

The army men warded off terrorists' attack on their positions Southwest of the town of al-Quaryatayn from Mahsa direction, killing and wounding a number of terrorists and destroying one of their armored vehicles.

In the meantime, the army's artillery and missile units targeted the positions of Al-Nusra Front (recently renamed to Fatah al-Sham Front) in the villages of Hawsh Hajwa, al-Sa'an al-Aswad and al-Qantou in Northern Homs, killing and wounding a number of terrorists and destroying their positions.

Sources in Southern Syria revealed on Tuesday that infighting has intensified between ISIL-affiliated militants and their rival terrorists from the Free Syrian Army (FSA) in the Western countryside of Dara'a, leaving over 70 militants dead mostly from the FSA.

The sources said that the militants of Jeish Khaled, affiliated to the ISIL, stormed the positions of Liwa Shohada al-Horiyeh and Ferqah al-Haq affiliated to the FSA in Hawz Yarmouk and managed to take control of Tal (hill) Majmou and the towns of Saham al-Joulan, Tasil, Adwan and Jalin.

Over 50 fighters from Liwa Shohada al-Horiyeh and Ferqah al-Haq were also killed in the clashes, added the sources.

Reports said that 70 militants from both sides were killed in the infighting in Dara'a but most of them were from the two FSA-linked terrorist groups.

The Syrian Army troops, backed up by the country's Air Force, engaged in fierce clashes with ISIL and blocked the terrorists' fierce attack on their first line of defense in the Southern outskirts of Deir Ezzur city.

The army soldiers warded off ISIL's large-scale attack on their positions in Panorama region, inflicting heavy casualties on the terrorists.

An army officer said the back up provided by the air force played a crucial role in fending off ISIL's attack.

Following the attack, the army units targeted positions and gathering of ISIL near Deir Ezzur's cemetery and the neighborhoods of Old Airport, al-Hamidiyeh, al-Sina'ah and in the village of al-Jafrah in the Eastern outskirts of Deir Ezzur city, a military source said.

According to reports, the army units deployed in Deir Ezzur's Airbase also opened artillery and missile fire at ISIL's movements in al-Mohandesin region near al-Thardah mountain South of Deir Ezzur, killing and wounding a number of terrorists and destroying four military vehicles of ISIL.

Elsewhere in the same region, army troops targeted a gathering of ISIL terrorists in al-Haraj area in the village of al-Hosseiniyeh, destroying a vehicle and inflicting a number of toll on the terrorists.

Also, the Russian and Syrian fighter jets carried out several bombing raids on the concentration centers of ISIL in al-Maqaber (cemetery), Jonayd Division and Tamin Brigade in Southern outskirts of Deir Ezzur, inflicting heavy casualties on the militants.

The predominantly Kurdish Syrian Democratic Forces (SDF) continued the third phase of the Euphrates Rage Operation in Raqqa province and drove ISIL out of more villages, cutting off a main supply road to the terrorist-held city of Raqqa.

The SDF engaged in fierce clashes with ISIL and managed to take control of the villages of Nofel, Aziz and Bir Adman.

The Kurdish fighters further pushed ISIL back from the village of Sabah al-Kheir.

The SDF further advanced against ISIL and seized control of the village of Kasar, closing off the road between Makman and Raqqa city, a key supply line of ISIL to Raqqa.

The Kurdish fighters managed to advance 7km against ISIL in Makman and laid siege on the ISIL in the village of Tarfawiyeh.

The SDF kicked off the third phase of its all-out offensive on Sunday to capture Raqqa.

The SDF offensive, codenamed Euphrates Rage Operation, kicked off with the aim of disconnecting Raqqa and Deir Ezzur and also laying siege on Raqqa city.

The SDF fighters made new military gains and engaged in fierce clashes with the ISIL terrorists in the second front of the operation which starts from Bir Haba village, and seized back Shoihan village Southeast of Malihan village.

The SDF fighters also opened third front which starts from Makman village and killed 11 terrorists after the start of heavy fighting with the ISIL.

The Kurdish fighters also took control of the villages of Javish, Bir Shomari and Fatatish.

Tags: Syria ISIL Aleppo
Short Link rasanews.ir/201nEo
Share
0
Please type in your comments in English.
The comments that contain insults or libel to individuals, ethnicities, or contradictions with the laws of the country and religious teachings will not be disclosed