Rasa - Bahraini police have once again clashed with protesters condemning the killing of a young activist by the Manama regime forces. 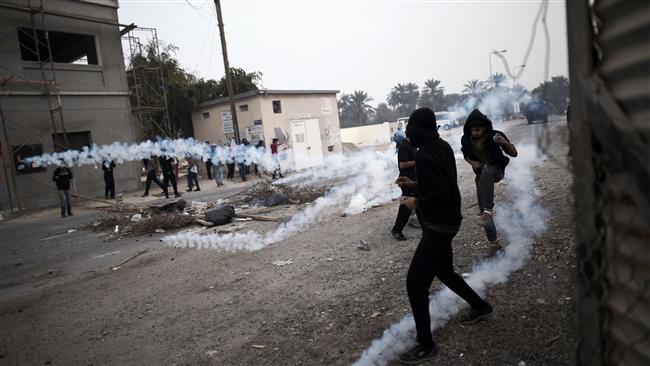 RNA - Witnesses said on Wednesday that residents of the village of Nuwaidrat, south of the capital, Manama, staged a protest on Tuesday night to protest the death of Abdullah al-Ajouz.

Ajouz was pronounced dead on Monday in custody after he sustained a number of gunshot wounds before he was arrested earlier in the day.

There were no immediate reports of any casualties in the Tuesday clashes with police.

The clashes come as the regime continues to crack down on opposition. Police have arrested 20 people over the past two weeks.

According to the police media center, the 20 people, aged between 20 and 65, were arrested between February 9 and February 19. The detainees, who include four women, were arrested on alleged terrorism-related charges.

In a latest move to further suppress political dissent in the island country, the lower house of the Bahraini parliament on Tuesday approved a contentious amendment to the constitution, under which civilians could be tried in military courts.

However, the bill has yet to be endorsed by the 40-member Consultative Council (Majlis al-Shura), the upper house of parliament, whose members are appointed directly by King Hamad bin Isa bin Salman Al Khalifah.

The activist was arrested last June over tweets he posted in 2015 criticizing the Manama regime for torturing prisoners at a local jail and for its involvement in the deadly Saudi aggression against Yemen.

Rajab was accused of “spreading false news and rumors and inciting propaganda during wartime,” allegations denied by the defendant.

Bahrain has witnessed anti-regime protests on an almost daily basis ever since a popular uprising began in February 2011.

The demonstrators are demanding that the Al Khalifah family relinquish power and let a just system representing all Bahrainis be established.

Scores of people have been killed and hundreds of others wounded or detained amid Manama’s crackdown on dissent and widespread discrimination against the country’s Shia majority.

Tags: Al Khalifah bahrain
Short Link rasanews.ir/201nEj
Share
0
Please type in your comments in English.
The comments that contain insults or libel to individuals, ethnicities, or contradictions with the laws of the country and religious teachings will not be disclosed