Rasa - A fundraiser by Muslim Americans to repair a vandalized Jewish cemetery in St. Louis, Missouri, has exceeded its initial goal. 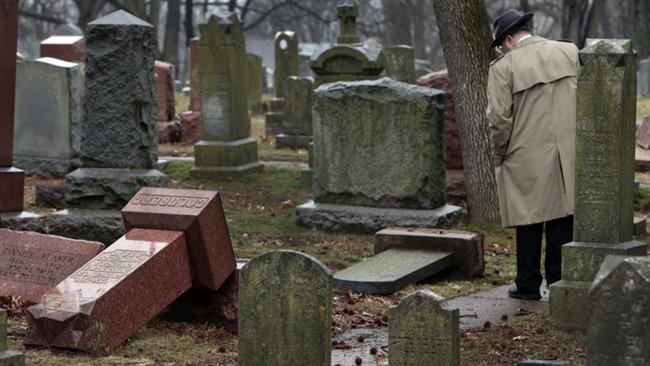 RNA - Titled “Muslims United to Repair Jewish Cemetery,” the online fundraiser was set up on Tuesday and broke its initial $20,000 goal in a few hours. The figure surged past $57,000 by Wednesday.

The money, contributed by more than 2,000 people, will be used to repair a historical Jewish cemetery, which was vandalized this past weekend.

More than 170 headstones were damaged at the Chesed Shel Emeth Society burial ground, according to police. The hateful attack came amid bomb threats against dozens of Jewish centers across the US.

From the start of the year through Monday, at least 69 bomb threats had reportedly been made to 54 Jewish centers in America and Canada. The FBI has been investigating some of the threats.

“Muslim Americans stand in solidarity with the Jewish-American community to condemn this horrific act of desecration against the Chesed Shel Emeth Cemetery,” read a statement by Celebrate Mercy, the organization behind the fundraiser.

“We also extend our deepest condolences to all those who have been affected and to the Jewish community at large,” the statement added.

After the cemetery’s full restoration, all remaining funds “will be allocated to repair any other vandalized Jewish centers,” the center added.

Describing itself as a foundation that aims “to teach the life and character of the Prophet Muhammad (PBUH)” through online campaign and social media, Celebrate Mercy said the fundraiser was an attempt “to send a united message from the Jewish and Muslim communities that there is no place for this type of hate, desecration, and violence in America.”

Missouri Governor Eric Greitens said in a tweet on Monday night that he was "disgusted” by “the senseless act of desecration.”

Tags: Syria Israel
Short Link rasanews.ir/201nEg
Share
0
Please type in your comments in English.
The comments that contain insults or libel to individuals, ethnicities, or contradictions with the laws of the country and religious teachings will not be disclosed