Iran to stand by Syria until ultimate victory

Rasa - President Hassan Rouhani has reassured Syria of Iran’s steadfast support for the Arab nation both on the battlefield against terrorists and the diplomatic front. 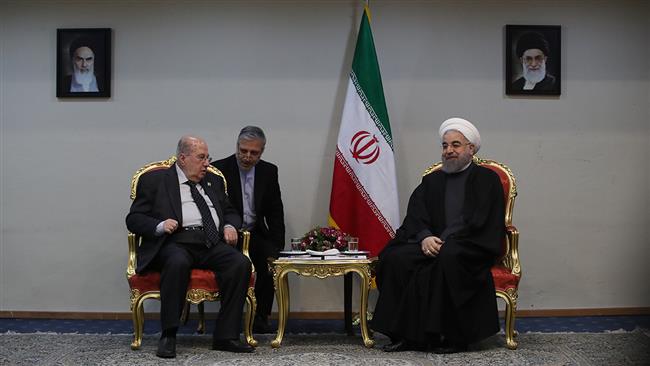 Rouhani said “Iran will stand by the Syrian people against terrorism and support the upcoming talks” between Damascus and opposition groups, which will be held under the United Nations auspices in Geneva on February 23.

The gains, he said, have even worked to positively affect foreign governments’ view of the developments in Syria, adding that they now feel that they must accept the realities on the ground in the Arab state.

At Damascus’ request, Iran has been lending military advisory support to the Syrian Army in its efforts to combat Takfiri terrorists. The Islamic Republic has also been providing the country with humanitarian assistance.

The support, together with backing from Russia, another ally of Syria, has played an instrumental role in the Syrian army’s gains against Takfiri militants on several fronts.

Besides military advisory support, Iran, along with Russia and Turkey, has mediated two rounds of crisis resolution talks between the Syrian government and opposition groups in Astana, Kazakhstan, over the past weeks.

The Iranian chief executive was meeting with the Syrian official on the sidelines of the 6th International Conference in Support of the Palestinian Intifada, which is underway in the Iranian capital.

“Among the reasons behind the pressure exerted on the Syrian people over the past years has been Syria’s support for the Palestinian people’s goals,” he added.

Rouhani said “Palestine is the Muslim world’s most important issue,” adding that the restoration of peace and security to Syria will benefit Palestine and the region as a whole.

Abbas, for her part, said Syria would not have made its gains against terrorists had it not been for Iran’s help.

“Coordination between Iran and Syria has led to very positive and favorable results and positively affected the military and political aspects of the issues concerning Syria,” she added.

She also said the ongoing conference in Tehran was important in the light of the fact that many Arab and Western states were trying to sideline the Palestinian cause.

On the sidelines of the Tehran conference, Rouhani also held a meeting with Salim Zanoun, the speaker of the Palestinian National Council, during which he expressed Iran’s unwavering support for the Palestinians.

“The Iranian people have so far paid a heavy price for supporting the Palestinian nation and opposing the Zionist regime" of Israel, and will resolutely continue their support, Rouhani said.

He noted that the Muslim world has to defend the rights of the Palestinian nation, adding that any move aimed at defensing the rights of Muslims, especially Palestinians, is of high significance to Iran.

“We should not allow any issue to overshadow… the liberation of Palestine and the fight against the Zionist regime’s atrocious measures,” he said.

Zanoun also called for further unity in the face of plots by the US and Israel to undermine the Iranian and Palestinian nations.

“Iran and Lebanon stood by the Syrian people and if it had not been for their cooperation and coordination, Damascus would have turned into a Daesh capital in the region,” he said.

Berri, for his part, praised Iran-Lebanon relations as well as Tehran’s resistance against enemy plots.

Stressing that Iran and Lebanon have shared interests and enemies, the Lebanese official also warned against new schemes to create rift between regional countries.

Tags: Iran Syria Hassan Rouhani
Short Link rasanews.ir/201nEe
Share
0
Please type in your comments in English.
The comments that contain insults or libel to individuals, ethnicities, or contradictions with the laws of the country and religious teachings will not be disclosed