Yemeni Tribes Vow to Give Crushing Response to Saudi Airstrikes

Rasa - The Yemeni tribes vowed to give crushing response to the Saudi regime by setting up military units in the Northern part of Sana'a province against the Riyadh-back troops. 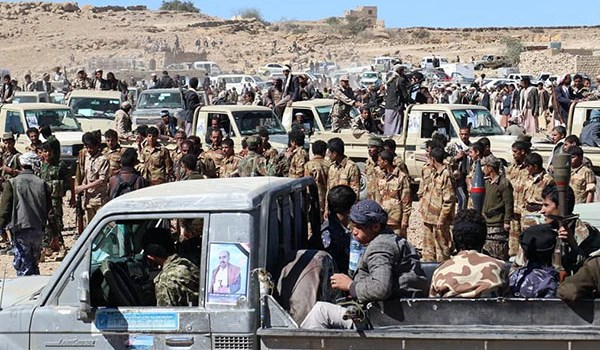 RNA - The military brigades were launched by several tribes of Arhab region in Northern Sana'a after the Saudi warplanes pounded a mourning ceremony in the region.

The Saudi fighter jets bombarded a mourning ceremony in the village of Shara'a in Arhab region North of Sana'a province last week. At least 8 Yemeni women and children were killed and 10 others were wounded in the Saudi airstrikes.

The Yemeni tribes warned that they will give a crushing response to the Saudi airstrikes, specially at a time when Riyadh has prevented peace talks from achieving any result.

A number of Yemeni tribal leaders and Commander of the Yemeni Army's Fourth Brigade Abu Ali were present in the ceremony held to mark the start of operation by the new military units of the Yemeni tribes.

In a relevant development earlier on Tuesday, the Yemeni army and popular forces pounded and destroyed a strategic military base in Jizan province with BM-27 Uragan rockets.

Mostahdas military base in Jizan province was destroyed with at least four BM-2 Uragan rockets fired by the Yemeni forces' missile units.

The Yemeni army's missile unit in a statement confirmed that the Uragan rockets precisely hit the target.

The Yemeni army has announced several times that it will hit Saudi Arabia's military positions if the Saudi-led coalition aircraft continue striking the Yemeni people.

Also on Sunday, the Yemeni army fired a ballistic missile at the strategic al-Shaqiq power plant in Jizan province in the kingdom's Southern part in reaction to Riyadh's continued air raids on innocent civilians across Yemen.

"The missile hit the target with high precision," the Arabic-language al-Massira television quoted a military source as saying.

There were no immediate reports on the damages caused to the power plant, but the Yemeni missile attacks usually inflict heavy losses on the Saudi forces.

Al-Shaqiq power plant generates 2,640 megawatts of electricity and it has been built by South Korea's Hyundai Heavy Industries Company at a cost of $3.3 billion.

Also on Monday, the Yemeni army and popular forces in a statement announced that their ballistic missiles are capable of passing through Patriot anti-ballistic missile interceptors.

The missiles possessed by the Yemeni army and Ansarullah have high-precision capabilities so that the third generation of Patriot missile defense systems cannot track them, the Arabic-language al-Massira news channel reported.

The US equipped Saudi Arabia with advanced Patriot anti-ballistic missile interceptors in 2016.

Tags: Yemen Saudi
Short Link rasanews.ir/201nES
Share
0
Please type in your comments in English.
The comments that contain insults or libel to individuals, ethnicities, or contradictions with the laws of the country and religious teachings will not be disclosed