Rasa - Iranian Parliament Speaker Ali Larijani warned of Israel's attempts to expand its influence among the Muslim and regional states. 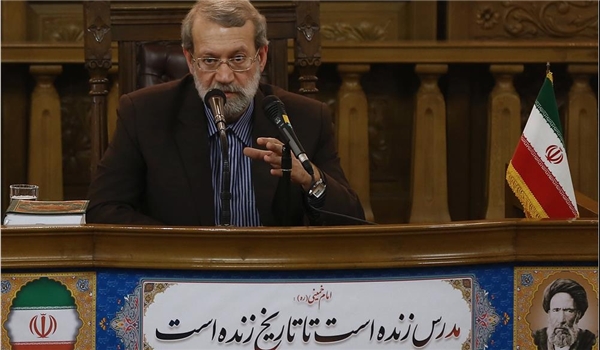 RNA - "The Zionist regime is trying to infiltrate into the regional states with an insidious motivation to change the place of the main enemy with an imaginary and hypothetical enemy, spread the atmosphere of discord in the region and gain an opportunity for their evil breathing," Larijani said, addressing the 6th International Conference in Support of the Palestinian Intifada in Tehran on Tuesday.

He also referred to Israel's support for the terrorist groups and its attempts to create insecurity in the region, and said, "It wants to make the Islamic states involved in an internal (war of) attrition."

His remarks came after a recent visit to Bahrain by a group of American Jewish businessmen drew the attention of Arab media outlets.

Videos and photos posted online showed the Jewish visitors and their Bahraini hosts warmly socializing and even dancing together.

Bahrain and Israel do not have official diplomatic relations. However, Israel’s behind-the-scenes ties with the Arab axis, including Saudi Arabia and Bahrain, in the Middle-East have been getting stronger in recent years.

Tags: Larijani Israel
Short Link rasanews.ir/201nEM
Share
0
Please type in your comments in English.
The comments that contain insults or libel to individuals, ethnicities, or contradictions with the laws of the country and religious teachings will not be disclosed