Rasa - Head of the Islamic Revolution Guards Corps (IRGC) Public Relations Department General Ramezan Sharif warned the trans-regional enemies of Iran's defensive power and its capability to attack their interests in faraway lands in case of any aggression. 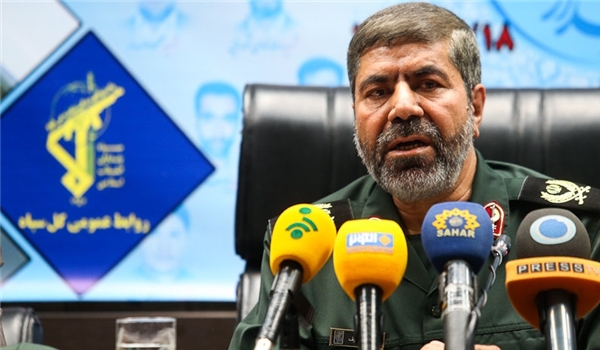 RNA - "We are the only country which enjoys 100% indigenized defense, naval, ground and aerospace forces and are able to target our enemies in distanced areas," General Sharif said, addressing a congress in the Central city of Yazd on Tuesday.

He underlined that the enemies of Iran should rest assured that the former Iraqi dictator Saddam Hussein's fate is waiting for them.

Elsewhere, General Sharif lambasted Saudi Foreign Minister Adel al-Jubeir for his unwise remarks against Iran, and said the Shiites and Sunnis have concluded that their number one enemy is the Zionist regime and its accomplices and partners.

In relevant remarks on Monday, IRGC Lieutenant Commander Brigadier General Hossein Salami said his forces would turn Iran into a graveyard for anyone who would be crazy enough to attack the country, a warning that comes days after the new US president picked up a hawkish tone against Tehran.

The enemy knows that taking the military option in practice will end in nothing but turning Iran into a "graveyard for aggressors", General Salami said.

Noting that the military option will only result in the annihilation of enemies, he said, "The enemies are aware of Iran's power."

General Salami underlined that Iran has made great progress in enhancing its military power and developing military infrastructures in the past 38 years after the Islamic Revolution.

Tags: Ramazan ‌Sharif IRGC Iran
Short Link rasanews.ir/201nEK
Share
0
Please type in your comments in English.
The comments that contain insults or libel to individuals, ethnicities, or contradictions with the laws of the country and religious teachings will not be disclosed