Rasa - Syrian army soldiers repelled terrorists' massive attack on their positions in Damascus after hours of clashes, inflicting major losses on them. 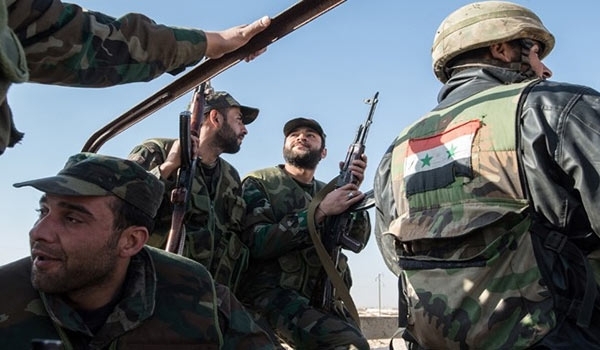 RNA  - The ISIL terrorists' large-scale attack to capture the government forces' positions in Eastern Ghouta was fended off by the strong defense of the Syrian military men.

Meantime, the Syrian army and popular forces continued their military advances in other parts of Syria, including Deir Ezzur and Homs, over the past 24 hours.

The Syrian army warded off an attack by the terrorist groups on government forces' military positions in Eastern Ghouta in Damascus province.

The Syrian army units beat back a group of terrorists who were trying to penetrate into Housh al-Zawahereh region in Eastern Ghouta, inflicting heavy losses on the militants.

Several terrorists were killed and wounded in clashes with the Syrian army.

Syrian government troops targeted the terrorists' moves and gathering centers in the Western countryside of Damascus, inflicting tens of casualties on the militants.

The Syrian army units heavily pounded the terrorists' positions in the Southern parts of Beit Saber village in Western Damascus. The attack killed at least 5 militants and destroyed their weapons and ammunition in al-Zahr al-Aswad hill.

Also, the Syrian soldiers fired missiles at al-Nusra Front's (recently renamed to Fatah al-Sham Front) gathering center near the road leading to Moqr al-Mayer village in Southeastern Damascus, killing and injuring over 38 terrorists in the region.

The sources referred to the Syrian army troops' attacks against al-Nusra (Fatah al-Sham) Front positions in al-Qaboun district, and said ground attacks have not yet started and only some al-Nusra gathering centers have been targeted.

Meantime, local sources reported that the National Peace Committee has distributed several copies of the peace agreement among the terrorists in Barzeh al-Balad and al-Qaboun districts to persuade them to accept the government's granted amnesty.

Meantime, the Syrian army units launched missile attacks on al-Nusra centers in al-Qaboun and Tishreen districts, killing 7 militants and wounding tens of others.

The attacks also demolished the al-Nusra Front's command room in the region.

The Syrian army backed by the country's air force destroyed the gathering centers and movement of al-Nusra Front in Hama and Idlib provinces, inflicting heavy losses on the terrorists and destroying their military bases.

Meantime, the Syrian army heavily pounded the terrorists in the town of Kafr Zita in Northern Hama, killing a number of terrorists and destroying their military vehicles.

The Syrian army and its allies are just 500 meters away from Harabash district near Deir Ezzur military airport which has been besieged by the ISIL terrorists for two months now, a military source said on Monday.

"The ISIL is not deployed in the region which separates the army from Harabash and Deir Ezzur airbase but it has control over the region by launching attacks from Sariya Junaid, Tal al-Muhandesin and the power plant," the source said.

He also said that the Russian fighter jets attacked a number of ISIL Toyota vehicles near Hamdan airport in the Southern parts of Bu Kamal city in Eastern Deir Ezzur, and added, "The common border between Syria and Iraq has also witnessed Russia's airstrikes on ISIL's Toyota vehicles stationed at the entrance of the Syrian territories in the Southern parts of Mayadeen city."

The Syrian army ambushed and killed a large group of the ISIL terrorists in Eastern Hama, preventing dispatch of aid to their comrades in the ancient city of Palmyra (Tadmur) in Homs province.

The Syrian army forces clashed with the ISIL militants in Ithriya region after ambushing them and killed and wounded all the terrorists in the area.

They also seized three vehicles moving from Wadi al-Azib to al-Tanhaj village in the Eastern parts of Salamiyeh to send aid to the ISIL terrorists near Palmyra.

Meantime, the Syrian army units repelled militants' offensive in Ithriya and killed tens of them after heavy clashes. Several weapons belonging to the terrorists were also seized by the Syrian troops.

Tags: Idlib Hama Damascus Syria
Short Link rasanews.ir/201nEA
Share
0
Please type in your comments in English.
The comments that contain insults or libel to individuals, ethnicities, or contradictions with the laws of the country and religious teachings will not be disclosed