Last Village on Mosul-Tal Afar Route Taken Back from ISIL

Rasa - The comprehensive military campaign by Iraqi military forces to liberate the Northern city of Mosul from ISIL militants continued on Monday with local media reporting that Iraqi popular forces have recaptured the last village on the road between Western Mosul and the strategic town of Tal Afar. 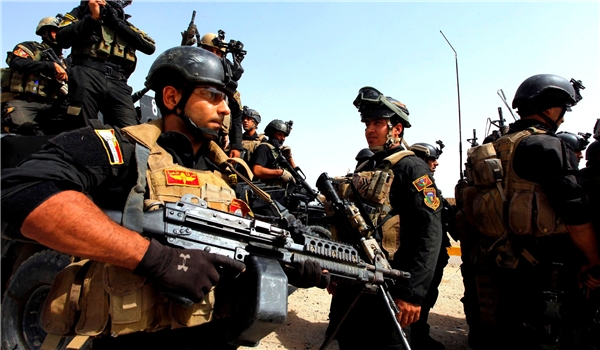 RNA - The comprehensive military campaign by Iraqi military forces to liberate the Northern city of Mosul from ISIL militants continued on Monday with local media reporting that Iraqi popular forces have recaptured the last village on the road between Western Mosul and the strategic town of Tal Afar.

Iraq's Popular Mobilization Forces (PMF) recaptured on Monday the last village on the road between Western Mosul and the strategic town of Tal Afar from ISIL militants.

PMF’s media service said it took over the village of Sahaji, effectively cutting out the last road linking ISIL stronghold of Tal Afar with Western Mosul and added that 23 militants were killed in a PMU bombardment near Tal Afar, Iraqi News reported.

Iraqi security forces, backed by the Popular Mobilization Forces (PMF), liberated 18 villages South of the city of Mosul since the launch of the military operation to liberate Western Mosul, the Iraqi Army said.

“The joint forces and the Popular Mobilization Units have liberated the villages of Al-Lazakah, al-Karama, albu-Jawari, al-Jamasah and Kunaitrah as well as al-Zarkotiyah, al-Athba, al-Kafoour and al-Abiadh, in addition to the control over the main electricity station in Al-Lazakah village that feed the entire right coast of Mosul and imposing full control over the road that connects the Hammam al-Alil intersection with Baghdad-Mosul highway,” Iraqi Army's media cell said in a statement, Badr News reported.

The statement has also pointed to the liberation of “Bakhira, al-Ibrahimiah, al-Husseiniya, Cheikh Younes, Debajah, Imam Hamza and Tel Kisom”.

Human Rights Watch said Monday militants of ISIL terror group, whose abuses against Ezadi women have been well documented, are going on their violence and immoral actions against local civilians, including raping and torturing women and girls in Northern Iraq.

The watchdog documented cases of arbitrary detentions, beatings, forced marriages and rape by the militants on women who have fled the town of Hawijah, which is still under ISIL control, Tribune reported.

HRW recounted the story of Hanan, a 26-year-old whose husband had already fled Hawijah, who was captured by ISIL militants along with other women when they also attempted to escape the town. ISIL militants told her that her husband’s flight made her an apostate and that she should marry the local militant leader.

Iraqi forces liberated 14 villages near the Northern city of Mosul in Nineveh Province from ISIL during the first day of the military operation to eventually retake the Western part of the city, Lt. Gen. Abdul Amir Rashid Yarallah, the commander of the operation, said.

According to the statement of the operation command, the Iraqi forces have also managed to take control of the main power station, which supplies the Mosul's entire Western bank with electricity.

Iraqi forces fought ISIL militants on Monday to clear the way to Mosul’s airport and edge closer to the strategic airfield on the second day of a ground offensive on the terror group’s remaining stronghold in the Western side of the city.

Iraqi Federal police and elite interior ministry units known as Rapid Response are leading the charge toward the airport, located on the Southern limit of Mosul, trying to dislodge the militants from a nearby hill known as Albu Saif, Iraqi News reported.

The Iraqi forces plan is to turn the airport into a close support base for the onslaught into Western Mosul itself.

Tags: ISIL Mosul Iraq
Short Link rasanews.ir/201nDx
Share
0
Please type in your comments in English.
The comments that contain insults or libel to individuals, ethnicities, or contradictions with the laws of the country and religious teachings will not be disclosed