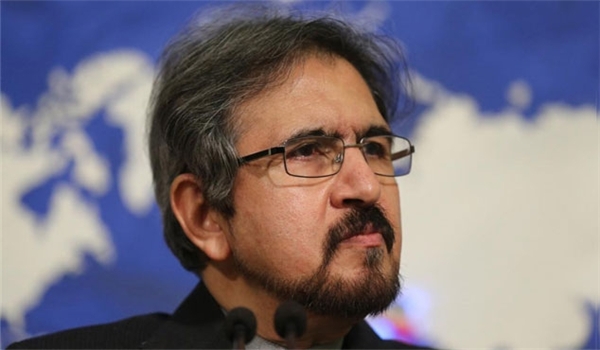 RNA - "Turkeys is one of our important neighbors and it has enjoyed much of our assistance, specially after the failed coup (in Turkey last year)," Qassemi told reporters in a press conference in Tehran on Monday.

"We hope that they speak about Iran more wisely to not make us respond. We will be patient with Turkey but patience has limits," he added.

Iran’s foreign ministry had also on Sunday dismissed as unconstructive Turkish Foreign Minister Mevlut Cavusoglu's recent anti-Iran claims, saying Turkey and certain other countries are responsible for instability and insecurity in the Middle-East.

“Those who have carried out meddlesome, illegal and illegitimate measures, supported terrorist groups and caused bloodshed and escalation of tensions and instability in the region cannot evade liability for such moves by playing a blame game,” Qassemi said.

They cannot free themselves from their self-imposed quagmire by leveling accusations against others, he added.

“The Islamic Republic of Iran’s regional policy has always been and will be based on maintaining the stability and security of all countries and neighbors,” the Iranian spokesperson said.

Qassemi emphasized that many fair governments and nations in the region and across the world have acknowledged such a policy pursued by Iran and welcome it.

Speaking at the Munich Security Conference on Sunday, the Turkish foreign minister criticized what he called an Iranian "sectarian policy" aimed at undermining Bahrain and Saudi Arabia.

Turkish minister's remarks came despite the fact that his country is widely known as a staunch supporter of militants wreaking havoc in Syria, providing them with money and arms as well as free passage through Turkish soil to Syria.

Tags: Turkey Iran
Short Link rasanews.ir/201nDt
Share
0
Please type in your comments in English.
The comments that contain insults or libel to individuals, ethnicities, or contradictions with the laws of the country and religious teachings will not be disclosed