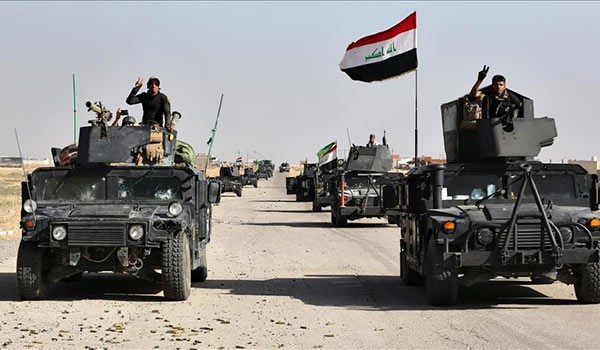 The Iraqi Army started a fresh round of military operation in Nineveh province on Sunday to drive the ISIL terrorists out of their bastion in the Western part of the city of Mosul.

Iraqi Prime Minister Haidar Al-Abadi declared on Sunday that the Iraqi army troops have started the fresh round of military operation to take back the Western part of the country's second-largest city.

With half the city under the control of Baghdad forces, the Iraqi Armed Forces will likely face heavier resistance in the Western part of Mosul, as the ISIL attempts to hold onto their final positions.

Hashd’s media service, meanwhile, said the PMF forces, also known as Hashd al-Shaabi, advanced towards the liberation of Tal Kaisoum, an area on the road between Central Mosul and the strategic town of Tal Afar.

Iraqi forces began moving on Sunday towards Mosul's airport, as they seek to capture the entire city from the ISIL terror group.

The Mosul international airport is the first target of a ground offensive to capture the Western side of the city that remains under the control of the ISIL militants, NRT reported.

Iraqi federal police units are leading a Northward charge on the Mosul districts that lie West of the Tigris River, aiming to capture the Mosul airport, located just South of the city, according to statements from the armed forces joint command.

Iraqi Federal Police forces recaptured Sunday more villages and neighborhoods in Western Mosul as part of a major offensive to clear the region from ISIL militants.

The Iraqi defense ministry’s media center said police forces recaptured the villages of Kafour, Gammasa and Bajwari, and took over al-Aqrab checkpoint that lies on the road between Mosul and Baghdad, Iraqi News reported.

Iraqi Prime Minister Haider al-Abadi said in a brief announcement on Sunday that security forces launched an operation to retake the Western side of Mosul, ISIL militants’ largest stronghold in Iraq which the group took over in 2014.

Tags: ISIL Mosul Iraq
Short Link rasanews.ir/201nDZ
Share
0
Please type in your comments in English.
The comments that contain insults or libel to individuals, ethnicities, or contradictions with the laws of the country and religious teachings will not be disclosed