Rasa - Israeli forces on Sunday detained ten Palestinians from several cities in the West Bank and East Jerusalem, according to local sources. 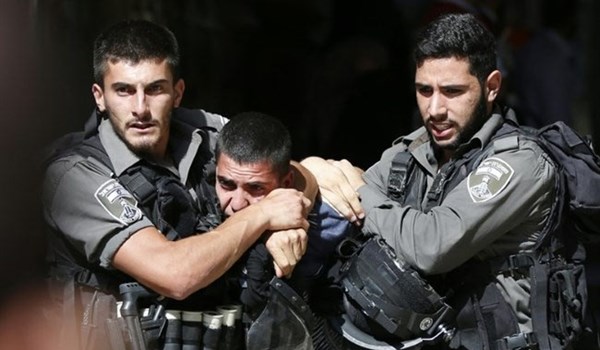 RNA - The Israeli soldiers, stationed at the entrance of al-Fahs road, detained a Palestinian truck driver from the city of Hebron in the occupied West Bank after Israeli soldiers claimed he tried to carry out a run-over attack, WAFA reported. The driver’s identity remains unknown.

Israeli forces also detained three from the town of Beit Fjjar, South of Bethlehem, making the total number of detainees from that town up to 50 since 2017.

Soldiers also detained three, including a minor, from the town of Silwan in Ramallah.

Meanwhile, Israeli police detained two Palestinians from the town of Hizma, North of East Jerusalem and another from the neighborhood of Jabal al-Mukkaber in East Jerusalem after raiding their homes.

Also on Monday, The Palestinian Prisoner’s Society (PPS) said in a statement that Israeli authorities issued 40 administrative detention orders, without charge or trial, against Palestinian detainees,

PPS lawyer, Mahmoud al-Halabi, noted that 14 orders were issued against Palestinians who were detained for the first time or re-detained after being released.

Over the years, Israel has placed thousands of Palestinians in administrative detention for prolonged periods of time, without trying them, without informing them of the charges against them, and without allowing them or their counsel to examine the evidence.

Palestinian detainees have continuously resorted to open-ended hunger strikes as a means to protest their illegal detention and demand an end to this policy which violates international law.

In February 2016, Palestinian journalist Mohammad Al Qiq ended 94 days of hunger strike which placed him on the verge of death. Al-Qiq was protesting his detention without charge or trial.

Tags: Israel Jerusalem Palestin
Short Link rasanews.ir/201nDS
Share
0
Please type in your comments in English.
The comments that contain insults or libel to individuals, ethnicities, or contradictions with the laws of the country and religious teachings will not be disclosed