Rasa - Hard-line Dutch politician Geert Wilders has launched his campaign for upcoming parliamentary elections in the Netherlands by once again scorning the Moroccan community in the country. 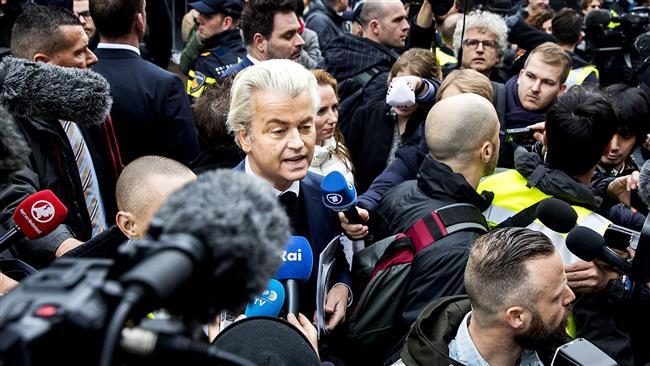 RNA - Wilders urged Dutch people in the town of Spijkenisse on Saturday to “get the Netherlands back” to its people and “retain the key to our door,” apparently meaning that the country should reject immigrants.

He had vulgar words for members of the Moroccan-Dutch community, whom he called “scum” — his word.

“Not all are scum, but there is a lot of Moroccan scum in Holland who makes the streets unsafe,” he told reporters, speaking in English. “If you want to regain your country, if you want to make the Netherlands for the people of the Netherlands, your own home, again, then you can only vote for one party.”

Moroccan-Dutch people make up two percent of the Netherlands’ population. And Wilders has been tried in the past for offensive remarks against them. He has also previously been taken to court for anti-Islam comments.

His Saturday comments were similar in tone and content to the anti-immigrant stance taken by US President Donald Trump during his presidential campaign.

Wilders himself seemed aware of that similarity but sought to downplay it when he said, “I’m not trying to play Mr. Trump here.”

Security presence was heavy during the Saturday rally at which Wilders spoke and journalists were occasionally prevented from approaching him.

From the fringes to the center — and thanks to Trump

Parliamentary and presidential elections in several Western countries, including the Netherlands, Germany and France, are due in 2017. Analysts say Trump’s upset victory in the US presidential election seems to have emboldened far-right politicians in those other countries and given them an opportunity to provoke public sentiments more assertively.

Polls indicate increased popularities for ultra-right political parties in Europe, although they are often still behind mainstream factions.

In France, far-right leader Marine Le Pen, who has been described in the media as the French Trump, has seen her popularity rise. She has publicly defended Trump’s ideas and said that he was enforcing measures in America that she had been pursuing to enforce in France for years.

She has also echoed Trump’s anti-immigration sentiments, demanding migrant children not be given access to French public schools. Last month, Le Pen revealed she would like to see the production of French vehicles and other industrial goods return to France; Trump took a protectionist economic stance during his 2016 presidential campaign.

Tags: Dutch Islam Anti-Islam Moroccan
Short Link rasanews.ir/201nDQ
Share
0
Please type in your comments in English.
The comments that contain insults or libel to individuals, ethnicities, or contradictions with the laws of the country and religious teachings will not be disclosed