Rasa - Protesters have staged a mock funeral procession in New York to mourn the death of the “American Presidency” under President Donald Trump. 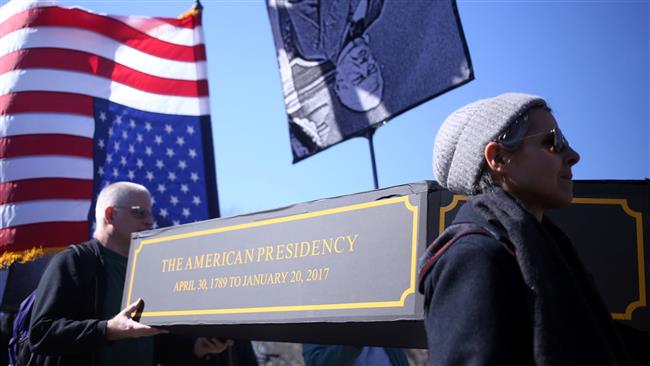 RNA - Hundreds of demonstrators, dressed in black mourning clothes, took part in a rally Saturday at Manhattan's Washington Square Park around a black casket that symbolically contained "The American Presidency."

The protest came ahead of the President's Day, a federal holiday held on the third Monday of February each year to honor the nation’s presidents.

The dates for the “birth and death” of the American presidency were printed on the casket as April 30, 1789, when George Washington took office as the first president of the United States, and January 20, 2017, when Trump was inaugurated.

Many protesters were dressed as historical US presidents including Abraham Lincoln.

"We wanted to plan a funeral on (in) honor of Presidents' Day. Every single one of these presidents you see passing before you, they all had problems. But nothing like what we're seeing from this presidency or this administration," said Christina Chapman, one of the organizers of the rally from the anti-Trump group Rise and Resist.

The demonstrators then carried the casket around the park with marching band music similar to traditional New Orleans funerals.

Since his inauguration, Trump has faced nearly non-stop protests and rallies, including mass demonstrations focused on women's rights that drew millions of people around the world on the day after he was sworn in.

The Washington Square Park in Manhattan was also the scene of another protest event on Friday, which organizers said was intended to spark discussions about how activism could fight President Trump's legislative agenda.

Activists had called for a "general strike" on Friday across the nation, a day after thousands of protesters marched and many businesses closed during "A Day Without Immigrants" to highlight the contributions of foreign-born naturalized citizens to the US economy.

Trump’s controversial immigration policies, along with a series of federal raids last week, have alarmed immigrant rights' groups and triggered mass protests in cities and airports across the country.

Tags: US New York America
Short Link rasanews.ir/201nDM
Share
0
Please type in your comments in English.
The comments that contain insults or libel to individuals, ethnicities, or contradictions with the laws of the country and religious teachings will not be disclosed