US reports exodus of Daesh terrorists from Syria's Raqqah after airstrikes

Rasa - The US Defense Department claims that its bombing campaign in the Daesh-held Syrian city of Raqqah is leading to an exodus of the terrorist group's top leaders. 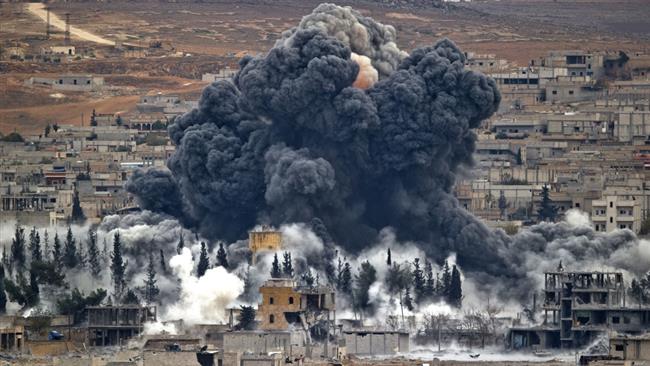 RNA - ISIL (Daesh) leaders "are beginning the process of leaving Raqqah and moving their operations farther downriver," said Pentagon spokesman Navy Captain Jeff Davis, adding that an unspecified number of ISIL "bureaucrats" are heading east along the northern bank of the Euphrates River toward the eastern city of Dayr al-Zawr, since they see "the end is near in Raqqah."

Davis further asserted that "We are seeing now an exodus of their leadership,” describing it as “a very organized, orderly withdrawal of a lot of their non-combatant support people."

According to local reports, while President Barack Obama's strategy in Syria was to recruit, organize and enable local Syrian Kurdish and Arab militants to recapture Raqqah rather than using US combat forces, the Trump administration is now reevaluating that approach and considering options that could include a more direct American combat role.

Meanwhile, senior US military authorities have stated that the massive American airstrikes that killed more than 80 ISIL terrorists in southern Libya last month have produced critical computer data, documents and information from interrogation of captives which the US can use to track down and target more militants.

Chief of US Africa Command Marine General Thomas Waldhauser told AP on Friday that the US obtained “significant intelligence” from the camps after the bombings, adding that "there's some things we're working on," without elaborating.

The report, however, cited a senior US military official as saying that the intelligence came after interrogation of several ISIL militants that survived the January 18th strikes.

The official, who spoke on condition of anonymity, further stated that the intelligence collected at the Daesh camp confirmed that the militants “had direct communication” with the core ISIL group in Syria and provided information about how they move through tunnels in the country.

The report also quoted Waldhauser as saying that there are still "a couple hundred" ISIL militants left in Libya, noting that there were over 5,000 of them in the country last year. Their numbers began to decline as Libyan forces, backed by US airstrikes, began to flush the terror elements out of the central coastal city of Sirte.

The new US defense secretary, James Mattis, is tasked with submitting a plan to President Donald Trump on ways to defeat ISIL forces in Iraq and Syria.

Daesh Takfiris were among the militants initially trained by the CIA in Jordan in 2012 to destabilize the Syrian government.

Tags: US Raqqah DAESH Takfiri Terrorist Syria Libya
Short Link rasanews.ir/201nDK
Share
0
Please type in your comments in English.
The comments that contain insults or libel to individuals, ethnicities, or contradictions with the laws of the country and religious teachings will not be disclosed