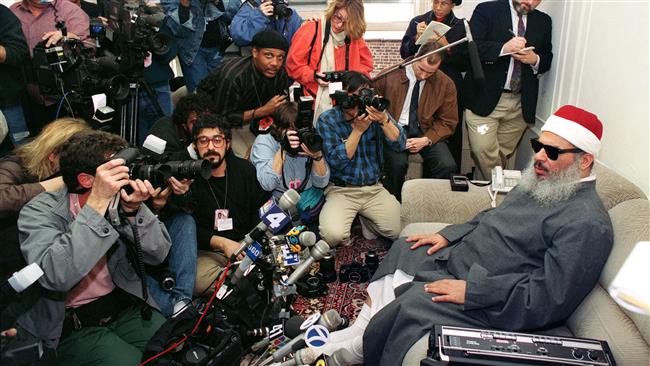 RNA - Known in the US as “The Blind Sheikh,” Abdel-Rahman died Saturday at the age of 78 in the Butner Federal Correctional Complex near the city of Raleigh due to “complications from diabetes and coronary artery disease,” according to the prison spokesman, Greg Norton.

Abdel-Rahman, who was an influential activist cleric that opposed the Israeli regime and long-time Egyptian dictators Anwar Sadat and Hosni Mubarak, was jailed and tortured in his native country before immigrating in 1990 to the US, where he led a congregation in Brooklyn neighborhood in New York, home to a sizable population of Zionist Jews with close ties to the Israel and militant settlers in illegal settlements in occupied Palestinian territories.

On October 1, 1995, Abdel Rahman was convicted of conspiracy in an alleged and highly controversial 1993 plot to conduct multiple bombings of major New York landmarks, including the World Trade Center, huge Lincoln and Holland Tunnels, the UN headquarters and the enormous George Washington Bridge.

The blind cleric and his alleged co-conspirators were not directly charged with the 1993 truck bombing of the World Trade Center, which killed six and injured more than 1,000 others, but were ruled guilty by the Federal District Court in Manhattan after a nine-month trial on sedition charges and conspiring with the perpetrators.

In the trial – highly influenced by pro-Israeli groups and lawmakers in New York -- Abdel-Rahman was further accused of urging the overthrow of US allies in the Middle East and “convicted” of plotting to kill Mubarak, as well as planning further attacks as part of a “war of urban terrorism” in the US. He was also accused of issuing a fatwa that led to the 1986 assassination of Sadat.

Prosecutors in the case argued that although the bombings he was accused of plotting never materialized, “the intent of the conspiracy was to destroy New York landmarks, kill hundreds of people and force the US to abandon its support for Israel and Egypt,” according to The New York Times.

This is while the sheikh consistently maintained his total innocence and at his sentencing he insisted that he had committed no crime “except telling people about Islam.”

Among the prominent people calling for immediate release of Abdel-Rahman was Egypt's first democratically elected president, Mohamed Morsi, who was ousted by the country's former army chief and current President Abdel-Fattah al-Sisi.

Abdel-Rahman’s defense lawyer, prominent US attorney Lynn Irene Stewart, who fervently argued for his innocence and insisted that he had been framed in the case, was eventually accused of helping pass messages from Abdel-Rahman to his followers and convicted on charges of “conspiracy and providing material support to terrorists” in 2005 and sentenced to 28 months in prison.

Stuart, who was automatically disbarred as the result of her conviction, was re-sentenced on July 15, 2010 to 10 years in prison on allegation of “perjury at trial” but was released from prison on December 31, 2013 because of her terminal breast cancer diagnosis.

US prosecutors later also linked Abdel-Rahman’s alleged followers to the 1990 assassination of radical New York Rabbi Meir Kahane as well as attacks on tourists in Egypt.

When the sheik was found guilty, Lynne Stewart wept in court, saying, "I believed, and I believe today, that he is wrongfully convicted."

Kahane, who was also politically active in Israel where he led the fervently anti-Arab Kahane Chai Party, led the notorious US-based Jewish Defense League organization, which has conducted numerous acts of terror against Arab and Palestinian activists and academics across the US.

Today, the Kahane group is regarded as a terrorist organization by the European Union, Canada, the US and even the Israeli regime.

Tags: US Cleric Egypt
Short Link rasanews.ir/201nDI
Share
0
Please type in your comments in English.
The comments that contain insults or libel to individuals, ethnicities, or contradictions with the laws of the country and religious teachings will not be disclosed