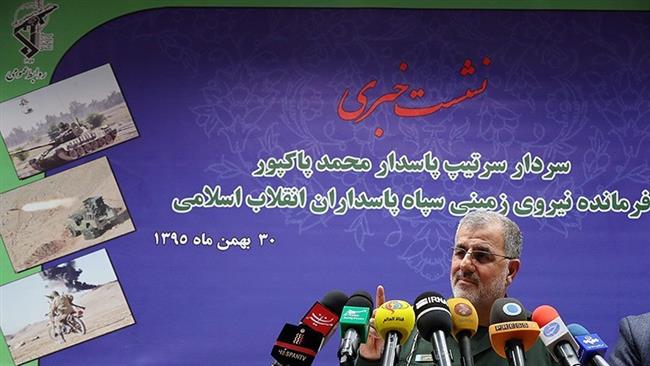 RNA - Brigadier General Mohammad Pakpour, the commander of the the Islamic Revolution Guards Corps (IRGC)’s Ground Forces, made the remark in a press conference in Tehran on Saturday.

“For sure, Daesh likes to make our country insecure, too, but they do not advance beyond the limits that we have designated, and if they do, they will be annihilated, just as they came and were annihilated last year and this year and some of them were even arrested,” he said.

The IRGC commander also said that Iranian security forces are daily engaging counter-revolutionary elements in the country’s southeastern borders but the elements find no path to enter because of the fortification of the borders and the presence of Iranian forces.

“To the northwest of the country (Iran) and beyond the borders, many consulates have been set up to revive dead outfits and provoke them against us,” he said.

Elsewhere in his remarks, Pakpour stressed that 70 percent of the security in Iran’s southeast is provided by locals.

Touching on Iran’s military advisory support for some regional countries in their campaign against terrorism, he said that the Islamic Republic has ties with different states and that some of them have requested such assistance.

A defense-security exercise by the IRGC Ground Forces, dubbed The Great Prophet 11, will begin in central and northeastern Iran on February 20, he announced.

All operations by the IRGC Ground Forces in reconnaissance and combat fields are done by drones, he also said.

Tags: IRGC Terrorist
Short Link rasanews.ir/201nDB
Share
0
Please type in your comments in English.
The comments that contain insults or libel to individuals, ethnicities, or contradictions with the laws of the country and religious teachings will not be disclosed