Rasa - Israel has established a medical corridor from the Northern part of the occupied Golan to its territories to transfer injured terrorists to its hospitals after terrorists sustained heavy casualties in their failed attacks on Syrian Army positions across Dara'a city in recent days, reports said. 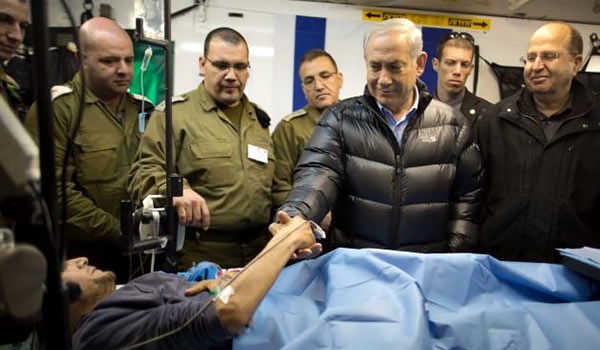 RNA - The terrorist groups have been using a medical-logistical corridor set up by Israel to transfer their wounded members to Israeli hospitals after Ahrar al-Sham and Al-Nusra Front (recently renamed to Fatah al-Sham Front) sustained heavy casualties in their fresh round of operation codenamed al-Mowt Va La al-Mazelah in the neighborhood of al-Manshiyeh in the Western part of Dara'a city.

The Israeli regime in full coordination with terrorist groups has established a medical-logistical corridor near the Quneitra border in Northern occupied Golan to pave the ground for the easier transfer of injured militants in Syria to Israeli hospital and medical centers in the Northern part of occupied Palestinian territories, including Zeif medical center in Safad and Rambam hospital in Haifa.

Terrorist commanders in Dara'a have allowed all patients even those militants that have not been injured in battlefield to be transferred to Israel to be treated there free of charge.

In the meantime, Israeli soldiers deployed along the medical-logistical corridor have started criticizing their commanders due to Israel's unprecedented logistical back up for terrorist groups in Syria.

A military source disclosed earlier today that the Al-Nusra Front has received almost $100,000 from some western countries, Arab States of the Persian Gulf and Israel to stage massive attacks on the Syrian Army in Dara'a.

The source said that a meeting was held amongst representatives of the security bodies of some western states, Arab countries in the Persian Gulf and Israel in one of the residential areas in Dara'a with the commanders of terrorist groups on February 13-14.

The source went on to say that commanders of the terrorist groups received $100,000 in the meeting to intensify attacks on government forces' positions in Dara'a.

The source said that terrorist groups knew that they would suffer heavy defeat in battle with the Syrian army but conducted the attack in order not to lose the financial supports of their foreign backers for future operations in Dara'a.

He underlined the terrorist groups' heavy defeat in the battle with the army men, saying the terrorist front has collapsed and the terrorists only try to save their credit in the eyes of their foreign backers.

Tags: Terrorist Syria Israel
Short Link rasanews.ir/201nCy
Share
0
Please type in your comments in English.
The comments that contain insults or libel to individuals, ethnicities, or contradictions with the laws of the country and religious teachings will not be disclosed