Yemenis pay tribute to martyrs ahead of Saudi war anniversary

Rasa - Yemenis have taken to the streets of the capital Sana’a to mark the Martyrs' Day, as the second anniversary of the deadly Saudi aggression against the impoverished nation approaches. 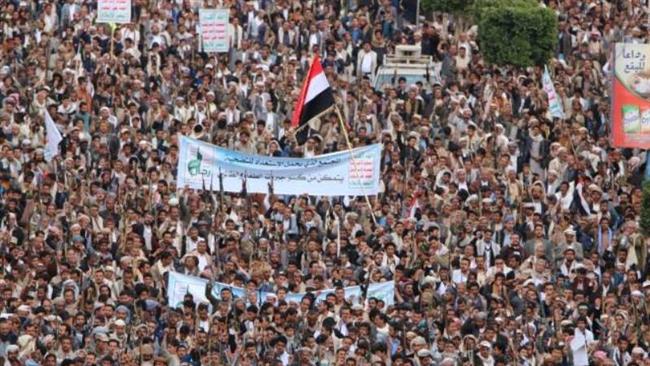 RNA - Protesters staged the “Loyalty to Martyrs' Blood” march in Bab al-Yemen of the capital on Friday.

A statement issued at the march stressed the significance of unity in the face of the Saudi aggression to honor the martyrs.

The statement, which was read by Hussein al-Qadi, the head of the Martyrs’ Foundation, also condemned crimes committed in Yemen by the regime in Riyadh, referring to a recent fatal airstrike that hit Arhab district of Sana'a. A dozen people were killed in the Saudi strike that targeted a funeral in the district on Wednesday.

The statement also urged international and local organizations to stand by the oppressed people of Yemen.

Saudi Arabia has been engaged in a deadly campaign against Yemen since March 2015. Riyadh’s aggression, which has killed more than 10,000 people, was launched in an attempt to restore power to Abd Rabbuh Mansur Hadi, a staunch ally of Riyadh, who has resigned as Yemen’s president but seeks to force his way back into power. The campaign also seeks to undermine the Houthi Ansarullah movement.

The Saudi aggression has also taken a heavy toll on the poor country’s facilities and infrastructure, destroying many hospitals, schools, and factories.

Tags: Yemen Saudi
Short Link rasanews.ir/201nCo
Share
0
Please type in your comments in English.
The comments that contain insults or libel to individuals, ethnicities, or contradictions with the laws of the country and religious teachings will not be disclosed