Rasa - The United Nations has reversed its position on the issue of "political transition" in the upcoming round of peace talks on Syria. 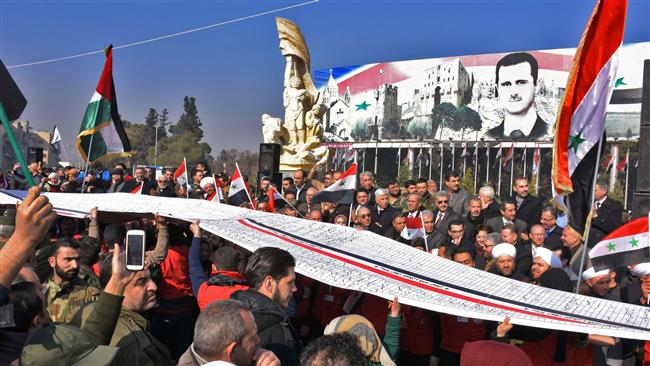 RNA - The term "political transition" is interpreted by the foreign-backed opposition as the ouster of Syrian President Bashar al-Assad or at least erosion of his powers.

Yara Sharif, the spokeswoman for UN Special Envoy for Syria Staffan de Mistura, initially said at a regular UN briefing in Geneva on Friday that the negotiations, due to be held in the city on February 23, would address the transition.

"I think, yes, you can use the word 'political transition'. It is going to be a focus I guess as it has been in the past," she answered a reporter's question.

However, she later clarified her statement in an email.

"This morning at the briefing I was asked about the intra-Syrian negotiations and whether the issue of political transition would be discussed."

"For clarification purposes, please note that the negotiations will be entirely guided by (UN) Security Council Resolution 2254, which talks specifically about governance, a new constitution and elections in Syria," she added.

Since March 2011, Syria has been gripped by militancy it blames on some Western states and their regional allies.

De Mistura estimated in August last year that more than 400,000 people had been killed in the crisis until then. The UN stopped its official casualty count in the war-torn country, citing its inability to verify the figures it receives from various sources.

Russia has also called for an end to demands for the removal of Assad.

Tags: UN Syria peace
Short Link rasanews.ir/201nCk
Share
0
Please type in your comments in English.
The comments that contain insults or libel to individuals, ethnicities, or contradictions with the laws of the country and religious teachings will not be disclosed