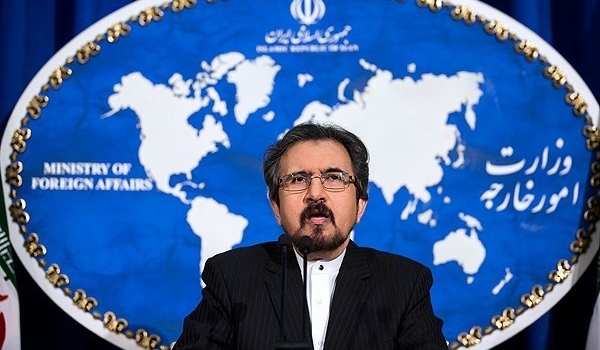 RNA - "Terrorists are taking their last breath in Iraq thanks to the braveries of the country’s army and its popular forces," Qassemi said.

The Iranian foreign ministry spokesman extended condolences to the Iraqi government and nation as well as the bereaved families of the victims on the sad occasion.

"With their unity and solidarity, Iraqis, including followers of all faiths and tribes, will soon celebrate their victory over the terrorists in Iraq," Qassemi said.

The Iranian foreign ministry spokesman reiterated that such passive measures of the terrorists in Iraq will by no means affect the will of the Iraqi forces to clean their land from "the dirt of the bloodthirsty terrorist groups".

On Thursday, a car bomb exploded in a Southern neighborhood of the Iraqi capital, killing over 50 people and injuring scores of others.

The incident took place when the explosive-laden vehicle blew up in a Baghdad street full of garages commuted by car dealers in Hayy al-Shurta district.

According to reports, the blast has so far killed 51 people, leaving at least 55 others wounded.

A few hours after the incident, the Daesh Takfiri terrorist group, which has been wreaking havoc in Iraq and neighboring Syria over past years, claimed responsibility for Thursday bomb attack.

The attack came only a day after a similar car bomb hit the Sadr City suburb of the Iraqi capital on Wednesday, killing at least 15 and wounding 50.

Tags: Bahram Qassemi Iran Terrorist Foreign Ministry Iraq
Short Link rasanews.ir/201nCj
Share
0
Please type in your comments in English.
The comments that contain insults or libel to individuals, ethnicities, or contradictions with the laws of the country and religious teachings will not be disclosed