Rasa - The United Nations and Yemeni officials have censured a Saudi strike that targeted a funeral ceremony near capital Sana’a, killing nine women and a child. 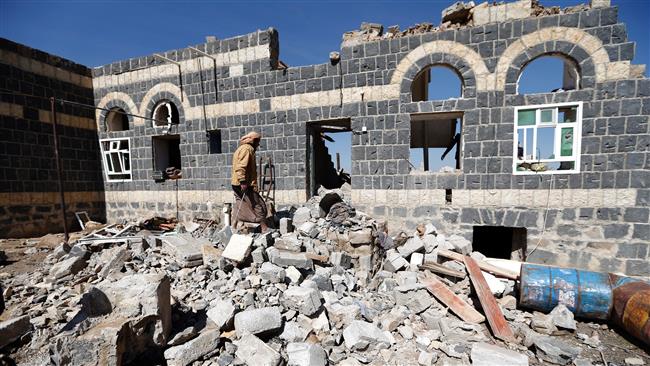 RNA - In a Thursday statement, the Ansarullah Political Council slammed as a “horrific crime” the Saudi air raid, which hit the funeral procession in the district of Arhab north of Sana’a earlier in the day.

“The raid once again revealed the enemy’s savagery and proved it is not committed to any religious principles or human values,” the statement read.

The Yemeni nation, the statement added, would give a firm response to Saudi crimes on the battlefield, stressing the need for strong resistance in the face of Riyadh’s aggression.

Thursday’s assault also wounded around 10 people. The fatalities are likely to rise as some of the injured are in critical condition.

Following the raid, it took hours for the local people to recover the bodies and the injured who were buried under the rubble.

The official said the fatal Saudi raid “amounted to war crime,” calling for the formation of an international fact-finding committee to investigate Riyadh’s crimes.

UN officials also joined the Yemenis in denouncing the raid, with theworld body’s Office for the Coordination of Humanitarian Affairs (OCHA) expressing shock over the incident in a statement.

“The manner in which the parties to the conflict are waging this war is taking an unacceptable toll on the civilian population in Yemen and as illustrated by this most recent tragedy, women and children are paying with their lives,” said UN Humanitarian Coordinator Jamie McGoldrick in the statement.

“I am alarmed to see this tragic loss of life further escalate the fighting, with reports of a retaliatory ballistic missile strike into Saudi Arabia’s Asir region,” he added.

UN Special Envoy for Yemen Ismail Ould Cheikh Ahmed said in a separate statement that Yemeni civilians were losing their lives on a daily basis in indiscriminate attacks by the parties to the conflict.

“Attacks on civilians are unjustifiable, regardless of the circumstances. Women and children in particular have been subjected to unspeakable suffering in this brutal conflict. This should stop immediately,” he said.

Ahmed pointed to the existing humanitarian catastrophe in Yemen caused by aggravating clashes on the Red Sea coast, saying tens of thousands of civilians have been caught in the war zone without access to humanitarian assistance and unable to flee to safety.

This is the latest in a series of such airstrikes since 2015, when the Saudis launched the military campaign in support of the former Yemeni government, a close Riyadh ally.

Last year, Saudi airstrikes hit a funeral hall in Sana’a, killing 140 mourners, including children, and wounded over 600 others.

Besides running Yemen’s affairs, Ansarullah fighters, backed by army troops and popular forces, have been defending the nation against the attacks by the Saudi military and its allies.

The United Arab Emirates (UAE), which has been helping Saudi Arabia in its war on Yemen, said on Friday two of its troops operating in Yemen have died.

UAE military officials said that one of the soldiers were killed during a military operation, while another died of a heart attack.

Tags: Yemen Saudi
Short Link rasanews.ir/201nCW
Share
0
Please type in your comments in English.
The comments that contain insults or libel to individuals, ethnicities, or contradictions with the laws of the country and religious teachings will not be disclosed