Powerful explosion at Pakistani shrine kills at least 72, injures over 150

Rasa - More than 70 people have been killed and over 150 others injured in a huge bomb explosion at a shrine in Pakistan’s southern province of Sindh. 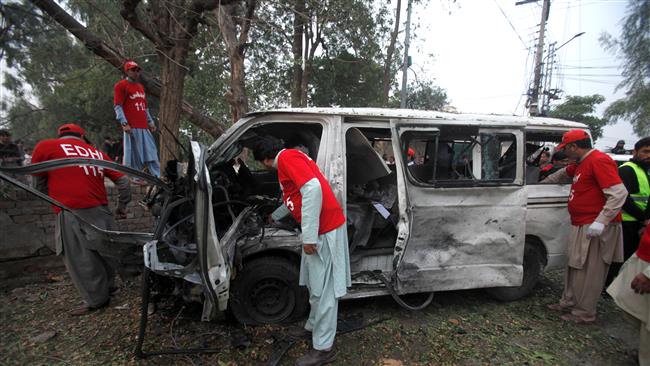 RNA - Pakistani local media reported that the blast ripped through the shrine in the town of Sehwan in Sindh Province on Thursday.

"At least 72 are dead and over 150 have been injured," Senior police officer Shabbir Sethar told Reuters by telephone.

The death toll is expected to rise as many of the injured are in critical condition.

The Daesh Takfiri group claimed responsibility for the attack, reported Amaq news agency, which is affiliated to the terrorist outfit.

"The past few days have been hard, and my heart is with the victims," Sharif said. "But we can't let these events divide us, or scare us. We must stand united in this struggle for the Pakistani identity, and universal humanity."

Multiple bombings have rocked Pakistan over the past few days.

On Wednesday, an assailant riding a motorbike attacked a van transporting a judge in the city of Peshawar. The driver of the van was killed and five people, including the judge, were injured.

The Peshawar attack came hours after two bombers hit a government compound in the tribal area of Mohmand near the Afghan border. At least three policemen and two passers-by died in the attack.

On Monday, a deadly bombing rocked Lahore, the capital of Punjab Province, killing over a dozen people.

The Pakistani Taliban faction Jumaat-ul-Ahrar claimed responsibility for the attacks in Lahore and Mohmand.

In a separate attack in the restive province of Balochistan, three Pakistani soldiers were killed and two others wounded when an improvised explosive device hit an army convoy, the military said in a statement.

A captain was among the three killed in the Thursday attack in Awaran district, according to the statement.

Balochistan has been plagued by separatist, extremist and sectarian violence, witnessing several bombings and shooting attacks over the past years.

Tags: DAESH Takfiri Pakistan
Short Link rasanews.ir/201nCN
Share
0
Please type in your comments in English.
The comments that contain insults or libel to individuals, ethnicities, or contradictions with the laws of the country and religious teachings will not be disclosed