Rasa - A prominent Syrian analyst warned that Washington's proposal to set up a safe zone in Syria may coax Ankara into betraying the peace talks in Astana. 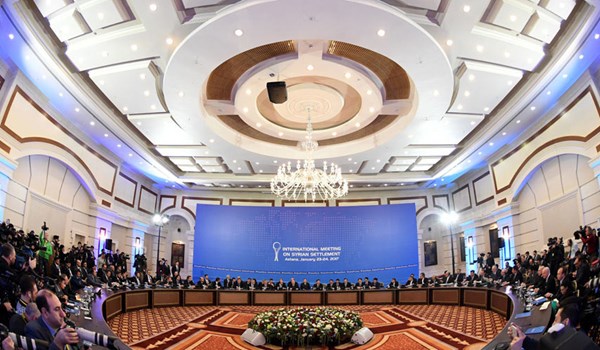 RNA - "The new US administration has thrown a new prey for the Turkish government by announcing plans to set up safe zones in Syria which can dissuade Ankara from supporting the Astana talks and ceasefire in Syria," Malaz Mikdad told FNA on Thursday.

"The fact that Turkey has not yet confirmed the presence of armed opposition delegation in Astana talks shows that Ankara possibly wants to withdraw from Astana talks and ceasefire process in Syria," he added.

The start of a fresh round of consultations on Syria peace process in Astana was delayed until February 16 as delegations of the Syrian opposition and Turkey have not yet arrived in the Kazakh capital.

The talks in Astana have been originally scheduled for February 15-16 in behind-closed-doors format followed by a joint news conference with participation of representatives from attending delegations.

The first round of Astana talks on Syrian crisis settlement brought together the representatives of the Syrian government and the armed opposition groups for the first time in the six years of the Syrian war. As a result of the talks, Russia, Iran and Turkey agreed to establish a trilateral mechanism to monitor the ceasefire that came into effect on December 30, 2016.

Tags: Turkey Syria
Short Link rasanews.ir/201nCL
Share
0
Please type in your comments in English.
The comments that contain insults or libel to individuals, ethnicities, or contradictions with the laws of the country and religious teachings will not be disclosed