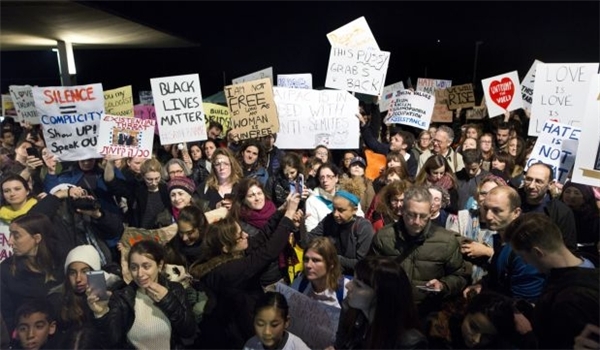 RNA - Hundreds of people, including a number of Orthodox Jewish activists, held demonstrations near the White House and the Trump International Hotel in Washington to protest against Netanyahu’s visit to the US, the Middle East Eye ported.

They also voiced opposition to the illegal settlements Israel is building on the occupied Palestinian land and to Trump’s campaign promise to move the US embassy in Tel Aviv to Jerusalem. In addition, they protested against the choice of David Friedman as US ambassador to Israel.

Many protesters were chanting “Bibi go home!” as the DC Metro Police watched them from their patrol cars.

“It’s our position that it is not in America’s best interest to have Friedman as an ambassador because he’s biased,” Kristin Szremski, the media director for American Muslims for Palestine, told Middle East Eye.

In downtown Boston, dozens of protesters first held a demonstration in front of Government Center on Wednesday afternoon but then marched towards the Israeli consulate’s office in the city, according to the Boston Globe.

They also protested against Israel’s illegal settlements and the possibility of the Trump administration moving the US embassy in Tel Aviv to Jerusalem al-Quds.

Protesters marched from Government Center to the Israeli consulate’s office in Boston on Wednesday.

“Simply because of my religion, I am denied entry to the city where I grew up for the first 13 years of my life,” Yamila Shannan, 45, said as she addressed the protesters.

Trump has said he is "thinking seriously" about moving the country’s embassy in Israel to Jerusalem al-Quds.

The new US president has also signaled that the United States, under his administration, would be far more tolerant of the illegal Israeli settlement construction.

More than half a million Israelis live in over 230 illegal settlements built since the 1967 Israeli occupation of the Palestinian territories of the West Bank and East al-Quds.

The continued expansion of Israeli settlements has created a major obstacle for the efforts to establish peace in the Middle East.

Trump said last week Israel’s construction of illegal settlements is not a good thing but “I don’t want to condemn Israel.”

"The settlements don't help the process. I can say that,” he said.

In addition, the demonstrators protested against Trump’s plan to build a wall along the Mexican border and his controversial temporary ban on immigrants and refugees from seven Muslim-majority countries.

Tags: US Netanyahu Israel Israel Trump Tel Aviv
Short Link rasanews.ir/201nCH
Share
0
Please type in your comments in English.
The comments that contain insults or libel to individuals, ethnicities, or contradictions with the laws of the country and religious teachings will not be disclosed