Rasa - The Syrian army and popular forces drove the ISIL terrorists out of two more key towns near Kuweires, paving their way for winning back control over the strategic town of Deir Hafer. 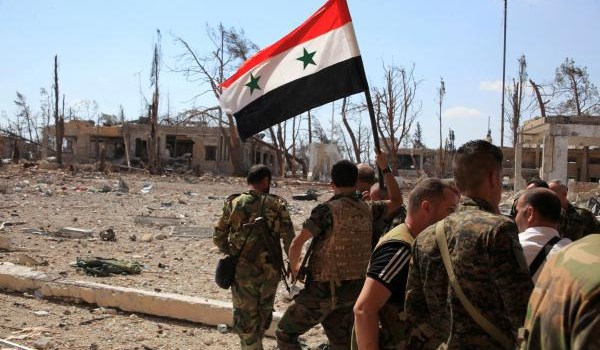 RNA - The Syrian army and popular forces drove the ISIL terrorists out of two more key towns near Kuweires, paving their way for winning back control over the strategic town of Deir Hafer.

Media sources said that tens of Turkish soldiers and Ankara-backed militants of the Euphrates Shield Operation have been killed or wounded in a car bomb blast near a town in Northern Aleppo.

The Arabic language desk of Hawar news said that tens of Turkish army men and Euphrates Shield Operation's militants were killed or wounded in a car bomb attack by unidentified assailants on the base of Mo'atasem Bellah Brigade in the village of Sheikh Yaqoub Northeast of the town of al-Ra'ei near Syria-Turkey border.

Also in the past 24 hours, Syrian army troops launched a new round of offensives on ISIL's positions to take control of the al-Assad Lake that is the main source of water supply to Aleppo city.

After their advances against ISIL and liberating the villages of al-Moshrefeh, Bayjan and Tal (hill) Bayjan Southeast of the town of al-Bab, the army troops have started intensive attacks on terrorists' defense lines to seize back al-Assad lake, villages around the lake and al-Khafseh region as the main water reservoir of Aleppo city.

Field sources, meantime, said that the army men stormed ISIL's positions from the towns of al-Oweisheh and Sarhan South of the town of Tadif and advanced towards East al-Khafseh region in Eastern Aleppo, forcing the terrorists to retreat form several villages.

ISIL has closed off flow of water from al-Khafseh facilities to Aleppo city.

Also, media sources said on Wednesday that four more civilians have been killed in the air and ground assaults of the Turkish air force and Ankara-backed militants in the town of al-Bab in Eastern Aleppo.

The sources said that four civilians, including three children of a family and an elderly, have been killed in the Turkish air raid and the artillery fire of Ankara-backed militants in the Eastern neighborhoods of the town of al-Bab.

Also on Wednesday, the Syrian army and its allies continued military operations in regions East of the strategic Kuweires airbase in Aleppo province and drove ISIL back from two more towns.

Following heavy clashes with the ISIL militants and killing tens of them, the army and its allies could regain control of Rasm al-Kabir and Rasm al-Kama towns.

Meantime, field sources in Eastern Aleppo said that the army's logistics units are establishing their positions in the region as government troops are preparing to purge terrorists from al-Mazboura, Tabara Mazi and Rasm al-Harmal towns.

Also, a military source said that army troops have now deployed in areas only 7km away from the strategic town of Deir Hafer after liberating the two towns.

He added that the terrorists' supply route from Rasm al-Harmal to Showailakh town was cut off after the army's highly important advance in Rasm al-Kabir.

Syrian Army troops continued to advance against ISIL and managed to take control of another strategic position West of the newly-liberated Hayan oilfield.

The army men stormed ISIL's defense lines and drove terrorists out of Jahar station in energy-rich regions in Eastern Homs.

The ISIL left behind a number of dead members and fled the battlefield towards al-Abar region, battlefield reports said.

According to the reports, ISIL's military hardware also sustained major damage in the attack.

In the meantime, the army soldiers targeted the positions of Al-Nusra Front (recently renamed to Fatah al-Sham Front) along the road connecting al-Qantou to al-Halmouz Southeast of the village of Jabourin, killing a number of terrorists.

Also in the past 24 hours, Syrian army troops fended off a joint offensive of the Al-Nusra Front and other terrorist groups in the Central part of Homs province, killing and wounding over 60 militants in several hours of clashes.

Al-Nusra and its allied terrorist groups stormed the positions of the government forces from the towns of Ein al-Hossein Janboul and al-Amiriyeh in Central Homs to capture the town of Ein al-Dananir and reach the key village of al-Moshrefeh, but the army soldiers repelled their offensive, killing over 15 militants.

Syrian Army troops continued to target the positions and movements of Al-Nusra Front and other terrorist groups in different parts of Dara'a city and province, killing at least 24 militants and wounding 50 others.

The army men targeted Al-Nusra Front's concentration centers in the neighborhood al-Nazeheen, a number of towns near Dara'a city, and village of Koum al-Raman, South of al-Qariyeh al-Qarbi, Southwest of al-Yadoudeh and the Shahab Hill, leaving over 24 terrorists dead and 50 others wounded.

Websites affiliated to the terrorist groups confirmed that Ahrar al-Sham's Commander Abu al-Abbas Kuya has been amongst the terrorists killed in al-Manshiyeh neighborhood in Dara'a city.

Also, sources privy to the terrorist groups in Southern Syria disclosed on Wednesday that vice-chairman of the delegation sent by an FSA-affiliated group to the first round of Astana talks has been killed in a bomb blast North-East Dara'a.

Tallal al-Khalaf, the Vice-Chairman of the tribal delegation and military representative of Jeish al-Ahrar Tribes - a branch of the Free Syrian Army (FSA) - to the Astana talks on Syria, has been killed in a booby-trap explosion as he was driving  his car from Jadal to al-Shayah in al-Lejah region.

Three of al-Khalaf's aides were also killed in the terror attack.

Al-Khalaf was the commander of the Tribes branch and deputy commander of Jeish al-Ahrar terrorist group that operates under the FSA.

No one has thus far claimed responsibility for the attack.

Also on Wednesday, the Al-Nusra Front failed to prevail over the Syrian Army troops' positions in the Western districts of Dara'a city after sustaining a number of casualties, reports said, adding that the terrorist group has transferred its wounded members to Israeli hospitals for treatment.

Syrian Army troops fended off the al-Nusra attack on their positions in al-Manshiyeh neighborhood, killing and wounding a number of terrorists.

Army reports said the al-Nusra suffered heavy casualties in the second round of attacks.

Local sources disclosed that the al-Nusra has transferred a number of its injured members to Israeli hospitals to be treated there.

Syrian Army troops, backed up by the country's fighter jets, restarted attacks on ISIL's defense lines and movements in the Southern outskirts of Deir Ezzur to end the terrorists' siege on government forces in the city's military airport.

The army soldiers stormed again ISIL's positions in al-Maqaber (Deir Ezzur's cemetery) and inflicted major losses on the terrorists, trying hard to open their way from the city to the airbase.

The army's missile and artillery units also targeted ISIL's gatherings and positions in al-Maqaber, killing and wounding a number of terrorists and destroying their military hardware.

In the meantime, the Syrian warplanes bombed heavily ISIL's defense lines in al-Maqaber region, killing a number of them.

The army said its units also detonated a tunnel of ISIL in al-Jafrah region in the Southern outskirts of Deir Ezzur, killing and wounding the entire terrorists inside the tunnel.

Also in the past 24 hours, the Syrian Army troops targeted ISIL's positions and movements in the Western and Southern outskirts of Deir Ezzur city, inflicting major losses on the terrorists.

The army’s artillery units destroyed ISIL's positions in the village of al-Baqaliyeh in the Western outskirts of Deir Ezzur city, inflicting heavy losses on the terrorists.

In the meantime, the army units and popular forces continued to clash with ISIL terrorists in different parts of al-Maqaber (Deir Ezzur's cemetery) in the Southern outskirts of the city, inflicting heavy casualties on the terrorists and destroying their positions.

Reports said that the Syrian Air Force is still airdropping food supplies for soldiers in the military airport and for locals in Deir Ezzur city and other areas in the province, pointing out that the Deir Ezzur branch of the Syrian Arab Red Crescent is distributing the airdropped aid among civilians.

The activists affiliated to the terrorist groups said that Jund al-Aqsa arrested a large number of militants of Jeish al-Nasr and al-Ferqat al-Wosta affiliated to the FSA in Northern Hama several days ago and killed over 100 of them in al-Khazanat checkpoint near the town of Khan Sheikhoun in Southern Idlib.

Also on Wednesday, the Syrian Air Force carried out several combat sorties over the gatherings and positions of Jund al-Aqsa in Southern Idlib, killing at least 20 terrorists and wounding several more.

The warplanes pounded the positions of Jund al-Aqsa in the villages of Kafr Ein and Madaya, leaving 20 terrorists dead and several positions of them destroyed.

Syrian Army troops ambushed a truck of Al-Nusra Front as it was transferring a large cache of weapons from Northern Hama to the Eastern territories of the same province.

It is still not clear why Al-Nusra transport was heading towards the ISIL front-lines; however, it is assumed that they were likely going to sell the weapons to the terrorist group.

Tags: Idlib Deir Ezzur Syria ISIL Homs Aleppo
Short Link rasanews.ir/201nCE
Share
0
Please type in your comments in English.
The comments that contain insults or libel to individuals, ethnicities, or contradictions with the laws of the country and religious teachings will not be disclosed