Rasa - Syria has categorically rejected as “non-credible” a recent report by Human Rights Watch (HRW), which alleged that Syrian forces had used chemical weapons during the Aleppo liberation operation. 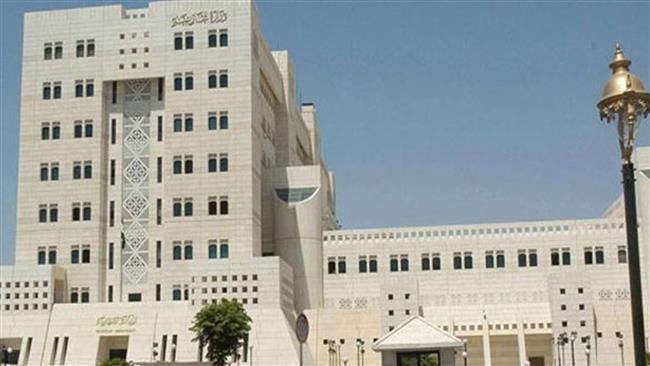 RNA - “The fact that Human Rights Watch relied on the terrorists’ media sources and on absolutely non-credible false witness accounts proves the lack of credibility of the report,” said an official source at Syria's Foreign Ministry in a statement released on Wednesday.

The statement came two days after the HRW report accused Syrian government helicopters of having dropped chlorine bombs on Aleppo residential areas on at least eight occasions between November 17 and December 13 last year.

The attacks killed at least nine civilians, including four children, and injured some 200 people, the report further claimed.

However, the Syrian Foreign Ministry official described the HRW report as “misleading,” “unprofessional” and “non-scientific,” stressing that it was based on distorted facts.

“This report comes to justify the terrorists’ defeat and the victories of the Syrian Arab Army and its allies,” the official added.

He also emphasized that Syria had honored all its obligations as a signatory to the Chemical Weapons Convention (CWC), and reiterated the government’s condemnation of the use of chemical weapons.

The HRW report came as part of Western plots at a critical time ahead of peace talks in Astana and Geneva and other future meetings aimed at resolving the conflict in Syria, the Syrian official stated.

The Syrian government's rejection of the report comes as militant groups such as Daesh and Jabhat Fateh al-Sham, formerly known as al-Nusra Front, have on several occasions used toxic materials to target civilians in the Aleppo areas.

Damascus has accused Saudi Arabia, Qatar, and Turkey of providing the militants with the banned weapons.

Last December, the Syrian army established full control over Aleppo, which had long been divided between government forces in the west and the militants in the east.

Aleppo's recapture came after the city’s evacuation process was completed under a ceasefire deal brokered by Russia and Turkey between Syria's warring sides.

The Aleppo liberation was a crushing blow to the militants and their foreign supporters, who have been actively working to overthrow the Damascus government since March 2011.

Tags: HRW Syria
Short Link rasanews.ir/201nBu
Share
0
Please type in your comments in English.
The comments that contain insults or libel to individuals, ethnicities, or contradictions with the laws of the country and religious teachings will not be disclosed