Rasa - At least six women have been killed in a Saudi airstrike targeting a funeral in the Yemeni capital, Sana’a. 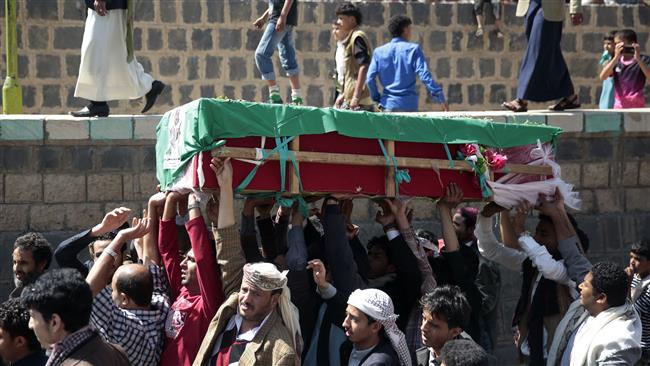 RNA - According to a preliminary count, 10 people were also injured in the strike on Arhab district on Wednesday, Yemen's al-Masirah television reported.

It is not the first time Saudi Arabia hits funerals in Yemen.

The first strike on October 8 hit the hall of the funeral that was packed with hundreds of adults and children. The second came three to eight minutes later when medical personnel were trying to help casualties from the first attack.

Doctors Without Borders, also known by its French acronym as MSF, has said the Saudi war on Yemen has left about 200,000 people facing shortages of food, water and medicine in the city of Ta’izz.

The head of MSF's Yemen mission, Djoen Besselink, said in a press conference in Jordan on Wednesday that attacks on hospitals, ambulances and medical staff had severely limited the MSF activities in the city, which he visited in January.

He added that he saw unprecedented levels of destruction at the four MSF-supported hospitals in Ta’izz, adding, "There's not a single room without bullet holes, the windows are gone, there's no more equipment. It's total failure."

Saudi Arabia has been engaged in a deadly campaign against Yemen since March 2015. Riyadh’s aggression, which has killed more than 10,000, was launched in an attempt to restore power to Abd Rabbuh Mansur Hadi, a staunch ally of Riyadh, who has resigned as Yemen’s president but seeks to force his way back into power. The campaign also seeks to undermine the Houthi Ansarullah movement.

Tags: Yemen Saudi
Short Link rasanews.ir/201nBr
Share
0
Please type in your comments in English.
The comments that contain insults or libel to individuals, ethnicities, or contradictions with the laws of the country and religious teachings will not be disclosed