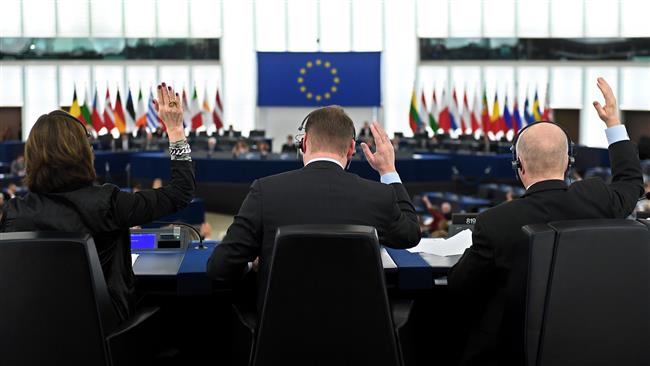 RNA - The new wave of condemnations against Tel Aviv came at a Tuesday meeting in Strasburg, France, during which the MEPs discussed the prospect of reviving the negotiations between Israelis and Palestinians.

At the event, Head of the European Parliament’s delegation for relations with Palestine Neoklis Sylikiotis highlighted the “futility” of mere EU condemnations, which have failed to prevent Tel Aviv from attacking Palestinian people, destroying their homes and stealing their land.

“Leniency from the EU has allowed the recent Knesset bill to legalize the theft of private Palestinian land for settlements. This decision violates international law and human rights conventions,” he said.

Sylikiotis further said, “All the while Israeli occupation forces continue to expand settlements, attack and kill Palestinian civilians, demolish their schools and homes and imprison children. These actions undermine peace-making efforts in the region.”

He also called on the EU to suspend the Association Agreement with Israel for its violations of the international law.

“No solution can be found unless Israel changes its policies,” said. Sylikiotis. “What we need is real pressure on Israel.”

During the meeting, Irish lawmaker Martina Anderson lashed out at Israel for undermining the prospects of the so-called two-state solution.

“The Middle East Peace Process and the two-state solution have been suffocated. It’s buried alive under the concrete slabs of thousands of illegal Israeli settlements,” she said.

Anderson urged the EU to go beyond mere words and impose sanctions on Israel.

“Every time Israel announces new settlements or demolishes more Palestinian homes, the international community just wags its finger and the EU merely condemns. Israel must be stopped from acting with impunity,” the lawmaker said.

Israel has been setting up settlements across the West Bank and East Jerusalem al-Quds since occupying the Palestinian territories in 1967. The constructions have been widely condemned as an insidious push toward facilitating the annexation of the lands.

The Israeli Yesha Council settler group said on Thursday that the number of Israeli settlers in the occupied West Bank had risen by 3.9 percent since 2015, twice the growth rate of the Israeli population. It said the number of the settlers had surged beyond 421,000 in 2016. The figure does not include the over 200,000 other Israeli settlers living in East al-Quds.

Tags: Israel Palestine
Short Link rasanews.ir/201nBO
Share
0
Please type in your comments in English.
The comments that contain insults or libel to individuals, ethnicities, or contradictions with the laws of the country and religious teachings will not be disclosed