Rasa - Thousands of people took to the streets across Bahrain to mark the sixth anniversary of a popular uprising against the ruling regime in the country and denounce the crackdown that has ensued. 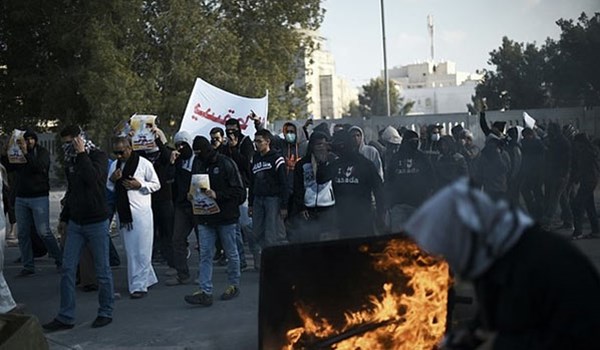 RNA - Protests to mark the anniversary of the February 14, 2011 revolution in Bahrain began on Monday and continued on Tuesday morning. People braved security forces, who were quickly deployed to crack down on the protests, presstv reported.

On Monday evening, people took to the streets in the Northern village of Abu Saiba, West of the capital Manama, chanting slogans against King Hamad bin Isa Al Khalifah and demanding the downfall of the regime.

They also held the monarch fully responsible for the crimes being perpetrated against the nation, the detention campaign against ordinary citizens and religious figures, and the killing of protesters.

Elsewhere, in the small north-central village of Bu Quwah, dozens of demonstrators expressed solidarity with distinguished Shia cleric Sheikh Isa Qassim, who has been stripped of his citizenship and whom Bahraini authorities seek to put on trial on politically-motivated charges.

As part of the crackdown on dissent, Bahraini authorities have dissolved several opposition groups, including the al-Wefaq National Islamic Society and the Islamic Enlightenment Institution, which were founded by Sheikh Qassim.

Skirmishes broke out in the Nuwaidrat Village, where Bahraini regime forces intervened and fired tear gas to disperse the crowd.

The protesters also expressed solidarity with slain pro-democracy campaigners and opposition figures during a protest in the village of Buri.

Similar demonstrations were staged on Sitra Island, situated South of Manama, the villages of Daih, Shahrakan, Bani Jamra, Karbabad, and Sanabis, as well as the Saar residential area west of the capital and Manama’s Bilad al-Qadeem suburb.

On Monday, Bahraini regime forces arrested a teenage protester in Bani Jamra after hitting him with a police car.

Anti-regime protests have been held on an almost daily basis ever since the popular uprising roared into life in 2011.

Manama has gone to great lengths to silence dissent. In March 2011, troops from Saudi Arabia and the United Arab Emirates were deployed to assist Bahrain in its crackdown.

Scores of people have lost their lives and hundreds of others sustained injuries or been arrested since then.

Tags: protest bahrain
Short Link rasanews.ir/201nBA
Share
0
Please type in your comments in English.
The comments that contain insults or libel to individuals, ethnicities, or contradictions with the laws of the country and religious teachings will not be disclosed