Rasa - Iraqi forces thwarted an attempt by around 200 militant fighters to flee their bastion of Tal Afar towards Syria, West of the city of Mosul, a security spokesman said. 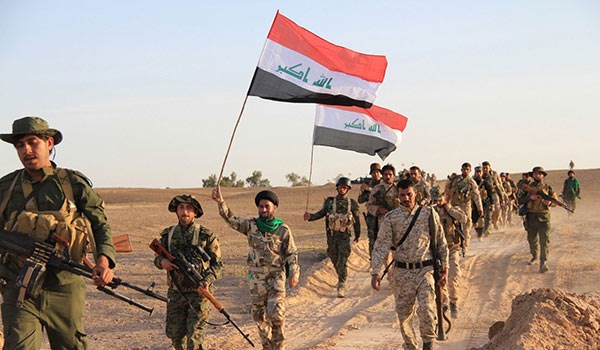 RNA - Iraq's Popular Mobilization Forces, Hashd al-Shaabi, encountered the ISIL militants as they used tanks in their bid to break out of Tal Afar. But the attack by the ISIL terrorist gangs which lasted around six hours ended to no avail, PMF's spokesman Ahmed al-Assadi told reported, New Arab reported.

The Iraqi forces have been deployed in desert areas West of Mosul since Iraqi federal forces launched a massive operation to retake the city from ISIL on October 17.

Their main goals are to retake Tal Afar, a Turkmen-majority city which is still held by ISIL, and to prevent the militants from being able to move men and equipment between Mosul and their strongholds in Syria.

"This was an attempt by ISIL to open a breach, flee to the Syria border and ex-filtrate some leaders and fighters," Assadi said.

He said that forces received support from army aviation helicopters when ISIL attacked them, and added that the fighting left around 50 ISIL members killed and 17 of their vehicles destroyed.

Assadi did not provide a casualty figure for the Hashd al-Sha'abi following the attack, which took place around 20 kilometers (12 miles) Southwest of Tal Afar.

“ISIL launched one of the most violent counter-attacks of its kind in months,” an Iraqi military official said earlier, adding that the militant group attempted to regain control of a strategic route leading to Syria.

The attacks which began in the afternoon, targeted three areas and lasted till dawn, he added.

The latest developments come just days after two suicide bombings in the Eastern half of the Iraqi city of Mosul, including one that hit a popular restaurant, killed at least five people on Friday and wounded over a dozen others, Iraqi military and medical officials said.

Along with four people killed in the restaurant blast, at least 15 were wounded, Iraqi military and security officials said.

Meanwhile, three soldiers were among those wounded in the attack on a checkpoint.

Iraqi forces declared Eastern Mosul liberated from ISIL weeks ago, allowing for a semblance of normalcy to slowly return to that part of the city. However periodic attacks and shelling by ISIL still occurs.

The massive operation to retake Mosul, Iraq's second largest city, from ISIL was launched in October. Since then Iraqi forces have slowly clawed back large parts of the city, however increasingly desperate militants have attempted to increase their attacks behind battle lines.

Tags: ISIL Mosul Iraq
Short Link rasanews.ir/201nB6
Share
0
Please type in your comments in English.
The comments that contain insults or libel to individuals, ethnicities, or contradictions with the laws of the country and religious teachings will not be disclosed