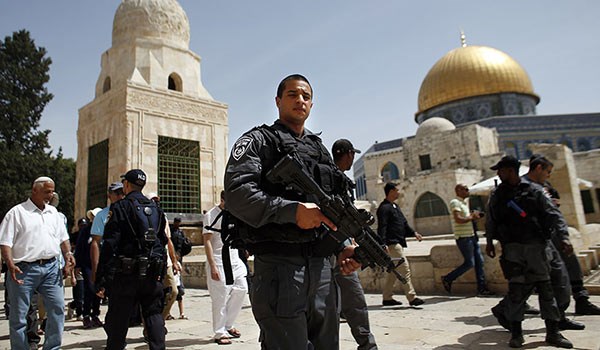 RNA -  Locals told Ma’an that 13 Israeli settlers and 43 armed Israeli officers raided the compound after entering from the Moroccans' Gate. Israeli police later entered the holy site and detained two Palestinian employees of Islamic Endowment (Waqf) that manages Al-Aqsa, who were identified by locals as Mahmoud al-Anati and Muhammad al-Hadra.

Israeli police ordered the two to immediately appear at an Israeli police station in occupied East Jerusalem’s Old City, where they were still being detained as of Monday afternoon.

An Israeli police spokesperson could not immediately be reached for comment on the detentions.

The incident came after Israeli police attempted to construct a portable aluminum cabin inside the Al-Aqsa Mosque compound Sunday evening, but were prevented by Palestinian guards despite the fact that police threatened to use force, according to Firas al-Dibs, the spokesperson for the Islamic Endowment.

Al-Dibs and eyewitnesses said that Israeli police had previously took measurements of the iron Gate of the Tribes entrance to the compound, in order to bring in the cabin, and Palestinian guards and a group of youths gathered at the gate to prevent Israeli police from entering.

According to the Islamic Endowment, 2016 saw the highest number of incursions on the Al-Aqsa Mosque compound by right-wing Israelis than previously recorded years.

Al-Dibs has said that these incursions were often accompanied by assaults on employees of the endowment, with Israeli forces routinely banning employees from entering the holy site.

Severe restrictions on movement for Palestinians are also typically implemented by Israeli authorities at the holy site for alleged security purposes, particularly during Jewish holidays.

Tensions around Al-Aqsa Mosque were a main contributor to increasing unrest that began in October 2015, after right-wing Israelis made frequent visits to the site during the Jewish high holiday season.

The compound, which sits just above the Western Wall plaza, houses both the Dome of the Rock and the Al-Aqsa Mosque.

The third holiest site in Islam, it is also venerated as Judaism's most holy place, as it sits where Jews believe the First and Second Temples once stood.

While Jewish visitation is permitted to the compound, non-Muslim worship is prohibited according to an agreement signed between Israel and the Jordanian government after Israel’s occupation of East Jerusalem in 1967.

Despite this agreement, Israeli authorities regularly allow Jewish visitors to enter the site and carry out religious worship -- often under armed guard.

Such visits are typically made by right-wingers attempting to unsettle the status quo at the site, and coincide with restrictions on Palestinian access, including bans on entrance and detentions, and often result in violent clashes between Israeli forces and Muslim worshipers.

Tags: Mosque Palestinian Israel al-Aqsa
Short Link rasanews.ir/201nAz
Share
0
Please type in your comments in English.
The comments that contain insults or libel to individuals, ethnicities, or contradictions with the laws of the country and religious teachings will not be disclosed