Rasa - Myanmar authorities have sentenced a man belonging to the Muslim Rohingya ethnic minority to death for his alleged role in a deadly raid on border police posts, an incident that triggered a fierce military crackdown in the western state of Rakhine. 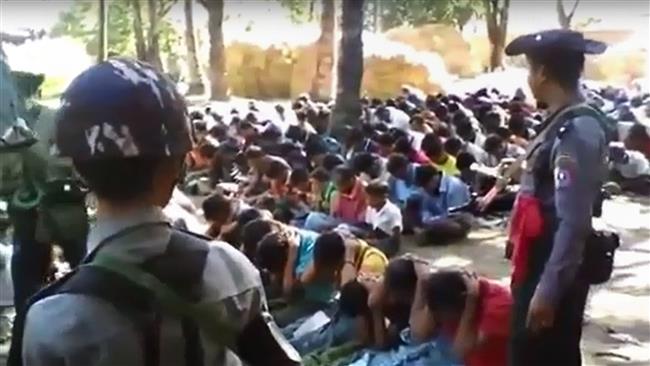 RNA - Yan Naing Lett, the police chief of Rakhine’s capital Sittwe, said in a statement on Monday that the verdict had been issued against the man, identified as Mamahdnu Aka Aula, by Sittwe court on Friday “for intentional murder,” without providing any information regarding the date of the execution.

“He participated in the attacks and led them, and planned them with others. He is one of the 14 attackers who were detained in Sittwe township,” the official further said, adding that the other 13 suspects had also appeared before the court but had yet to be sentenced.

On October 9 last year, a group of unidentified armed men attacked the Kotankauk border post, killing at least nine police forces. The government blamed the Rohingya for the assault despite the fact that Rohingya have no militant faction to fight for them. The minority has flatly denied the allegations against it.

On February 3, the United Nations Office of the High Commissioner for Human Rights (OHCHR) released a shocking report, entitled “Interviews with Rohingyas fleeing from Myanmar since 9 October 2016,” which said that Myanmar’s security forces had committed mass killings and gang rapes of Rohingya Muslims and burned down their villages in a campaign that “very likely” amounted to crimes against humanity and possibly ethnic cleansing.

The country’s military has blocked access to the region and banned journalists and aid workers from entering the state. Rakhine has also been the scene of communal violence at the hands of Buddhist extremists since 2012. Hundreds of people have been killed and tens of thousands have been forced from their homes and live in squalid camps in dire conditions in Myanmar, Thailand, Malaysia and Indonesia.

The government denies full citizenship to the 1.1 million-strong Rohingya population, branding them illegal immigrants from Bangladesh. However, many believe the Rohingya are a community of ancient lineage in Myanmar. According to the UN, the Rohingya are one of the most persecuted minorities in the world.

The bloody crackdown on the Muslims by the military has now prompted an international outcry, posing the biggest challenge to Suu Kyi since her National League for Democracy party won elections last year.

Tags: Muslim Rohingya Myanmar
Short Link rasanews.ir/201nAx
Share
0
Please type in your comments in English.
The comments that contain insults or libel to individuals, ethnicities, or contradictions with the laws of the country and religious teachings will not be disclosed