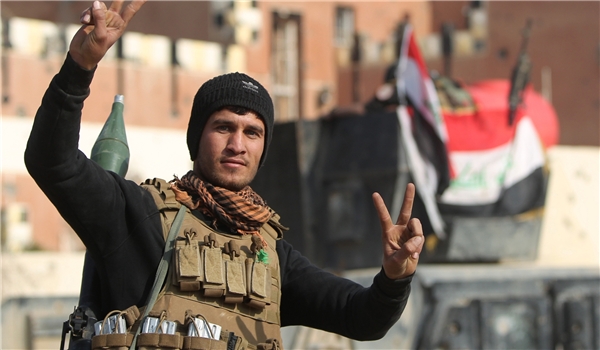 RNA - At least 50 ISIL terrorists were killed when Hashd al-Shaabi repelled an attack by the terrorist group on Ain al-Hasan and Kharbeh Hajish villages.

A sum of five military vehicles of the terrorists and a large amount of their arms and ammunition were also destroyed in the army offensives.

In a relevant development on Saturday, Kata’ib Seyyed al-Shuhada popular forces announced foiling an attack launched by the ISIL group, West of the city of Mosul, while pointed out to the killing of 10 members of the group.

“Kata’ib Seyyed al-Shuhada fighters thwarted a terrorist attack by the ISIL on the area Tal Abta,” the popular forces said in a press statement.

"The fighters killed ten members of the ISIL, as well as burning three vehicles. One member of Kata’ib Seyyed al-Shuhada was killed, while two others were wounded in the attack,” the statement added.

In January 25th 2017, Prime Minister Haider al-Abadi announced that security forces fully liberated the Eastern side of the city of Mosul.

Tags: Hashd ISIL Iraq
Short Link rasanews.ir/201nAl
Share
0
Please type in your comments in English.
The comments that contain insults or libel to individuals, ethnicities, or contradictions with the laws of the country and religious teachings will not be disclosed