Rasa - cThe Yemeni army and popular forces targeted and destroyed an arms depot of the Saudi-led troops in Asir province, inflicting heavy losses on them. 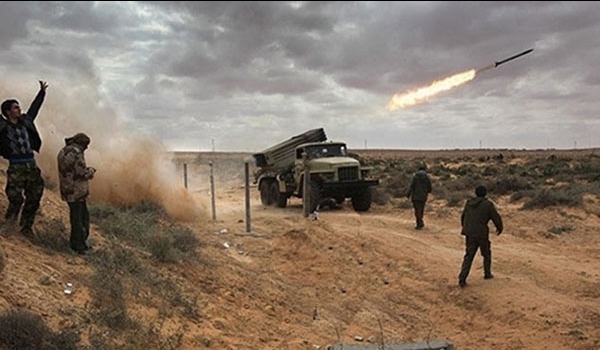 RNA - Saudi Arabia's weapons and ammunition depot in al-Shabeh region of Asir province came under rocket attacks of the Yemeni forces and was destroyed.

In a relevant development on Sunday, the Yemeni army's artillery units pounded several military bases of the Saudi-led troops in Asir province.

The Yemeni army and popular forces also hit hard the concentration centers of the Saudi-led troops in Hamir area in Maqbaneh region and also Sabrin region.

In a relevant development on Tuesday, the Yemeni army's artillery units pounded the gathering centers of the Saudi-backed militants in Ta'iz province, killing and injuring several militias.

The Saudi-backed militias' concentration centers in Hamir district in the town of Maqbaneh sustained heavy losses in the Yemeni forces' artillery attacks.

There is yet no report on the exact number of casualties on the part of the Riyadh-backed militants in Hamir district, but similar attacks by the Yemeni forces usually leave heavy losses and casualties on the Saudi-backed troops.

The Yemeni forces targeted and destroyed a military vehicle of the Saudi-backed militias in al-Hamra hilltop in Maqbaneh region as well.

The mercenaries were killed when a guided missile hit the military vehicle carrying them, local media quoted a military official as saying on Wednesday.

A Saudi-led coalition, supported by the United States, has been fighting against the Yemeni forces since 2015 to re-install the Hadi government.

The Yemeni army made the announcement of their first ever attack on the city via a statement released by the official state Yemen news agency.

In the statement, they claimed that the missile had been launched at a Saudi military base located to the west of the capital in retaliation for the kingdom’s relentless war against their country.

Tags: Yemen Saudi
Short Link rasanews.ir/201nAk
Share
0
Please type in your comments in English.
The comments that contain insults or libel to individuals, ethnicities, or contradictions with the laws of the country and religious teachings will not be disclosed