Rasa - Yemeni women have taken to the streets on the outskirts of the capital against Saudi Arabia’s invasion of their country. 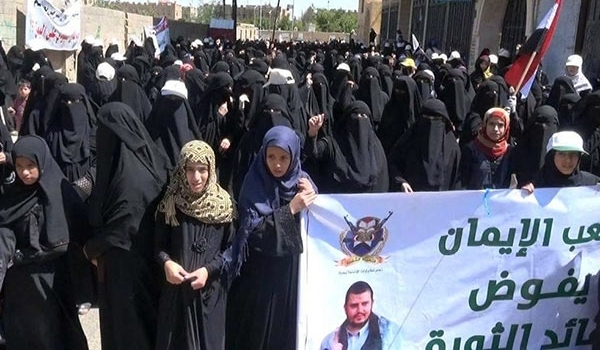 RNA - Demonstrators expressed support for the army and Ansarullah forces who are defending Yemen against aggressors, press tv reported.

Nearly a dozen civilians have lost their lives when Saudi aircraft carried out an airstrike against a residential neighborhood in Yemen's Southwestern province of Ta'izz, Arabic-language al-Masirah television network reported.

Ten civilians were killed on Saturday afternoon, when Saudi warplanes struck a house in the Red Sea port city of Mukha, South of Sana'a.

Tags: Yemen Saudi
Short Link rasanews.ir/201nAi
Share
0
Please type in your comments in English.
The comments that contain insults or libel to individuals, ethnicities, or contradictions with the laws of the country and religious teachings will not be disclosed