Rasa - UN Secretary-General Antonio Guterres has called for the resumption of peace talks between the warring sides in Yemen, which has been under incessant attacks by the Saudi regime and its allies. 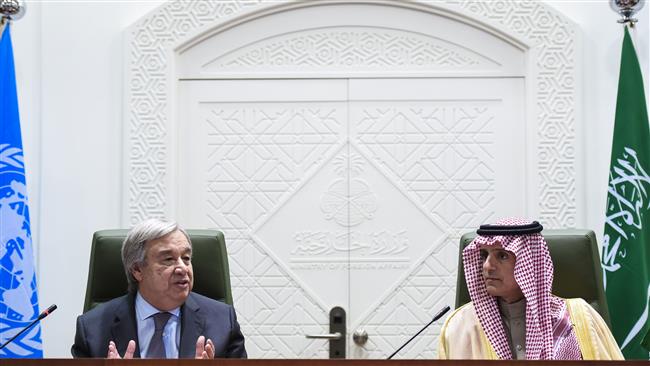 RNA - “Whatever we can do to make resurrection of the need for people to be able to negotiate, to be able to come to a solution for the Yemeni people, is something that we will always be available to contribute to,” Guterres said at a joint press conference with Saudi Foreign Minister Adel al-Jubeir in Riyadh on Sunday.

The UN chief also urged the conflicting sides in Yemen to ensure the unhindered delivery of relief aid to civilians.

“Humanitarian aid is for those that really need it, and so we are very keen in always appealing to all parties to any conflict not to use humanitarian aid for purposes that are not humanitarian, and we will always condemn any form of intervention that will lead for that deviation to take place,” he said.

UN peace envoy Ismail Ould Cheikh Ahmed also attended the press briefing. He has been pushing for a peace plan meant to pave the way for a political transition in the country.

Guterres is on his first Middle East tour since he was sworn in on January 1. He is due to visit the United Arab Emirates (UAE), Oman, Qatar and Egypt.

Saudi Arabia, backed by its allies including several Persian Gulf Arab states, has launched a military campaign since March 2015 in support of Yemen’s former government, a close Riyadh ally, and against the Houthi Ansarullah movement.

The Houthi fighters, along with the Yemeni army and popular forces, have been defending the nation against the war, which has so far left over 11,400 people dead, according to the latest tallies

Several rounds of peace talks between Ansarullah and the party loyal to ex-president Abd Rabbuh Mansur Hadi have failed to yield results amid deep divisions.

The Houthi movement has been running Yemen’s affairs since late 2014, when Hadi resigned and fled to Riyadh. The former president is now based in Aden, but spends most of his time in the Saudi capital.

In January, the UN envoy told the UN Security Council that Hadi “continues to criticize” the peace proposals without agreeing to discuss them, adding that such an approach “will hinder and impede the path towards peace.”

The Houthi Ansarullah movement is also critical of Cheikh Ahmed’s role, saying the UN official fails to speak the truth about the situation on the ground in Yemen, and that he is siding with the invaders by keeping silent on Saudi crimes.

However, the UN chief on Sunday voiced his full support for Cheikh Ahmed during the news conference in Riyadh.

On the battlefield in Yemen

The developments come as Yemeni forces continue their retaliatory attacks against the Saudi military and its mercenaries.

On Sunday, Yemen’s al-Masirah television reported that the Yemeni army and Ansarullah fighters purged several areas and hills near Yam Mountains in Nihm district, northwest of the capital Sana’a, of Saudi-backed militants, leaving a number of them dead and injured.

Meanwhile, the Yemeni forces destroyed a weapons warehouse belonging to the Saudi military in the kingdom’s Asir region by firing rocket-propelled grenades.

The Yemeni forces also fired artillery shells at a military position in the Saudi southwestern province of Najran, leaving an unspecified number of soldiers injured.

In another development, the Saudi military issued a statement late Sunday, declaring the southern city of Hudaydah a military zone from 10 a.m. (0700 GMT) on Monday until further notice.

It urged civilians in the port city to “remain in their homes and avoid clashes.”

The statement came days after the UN reported a rise in Saudi airstrikes against Hudaydah, possibly trapping civilians and hampering humanitarian operations there.

Tags: Yemen UN Saudi
Short Link rasanews.ir/201nAf
Share
0
Please type in your comments in English.
The comments that contain insults or libel to individuals, ethnicities, or contradictions with the laws of the country and religious teachings will not be disclosed