Rasa - The Syrian army backed by the country's air force hit hard the terrorists' military positions and hardware near the city of Deir Ezzur. 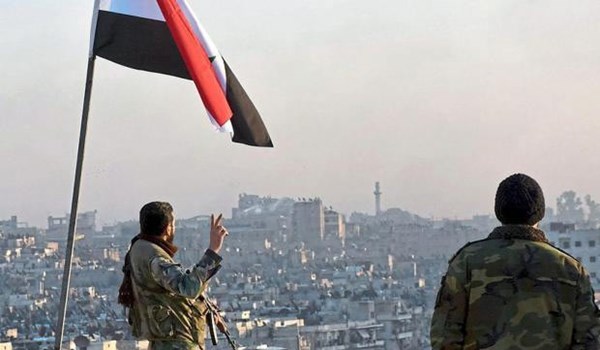 The army troops and fighter jets hit ISIL's positions and movements hard in al-Makbat region and in the slopes of al-Thardah mountain a few kilometers to the South of Deir Ezzur, destroying an ISIL camp.

Over 75 terrorists were killed or wounded and five vehicles and two tanks were destroyed in the attack. The camp was set ablaze in the attack.

Reports said earlier on Saturday that the army troops started fierce clashes with ISIL in different regions in the Southern outskirts of Deir Ezzur city, decreasing the distance between the government troops in Eastern and Western parts of the city to only 600 meters.

The al-Nusra Front took to the towns of Ein al-Hossein, Jaboula and al-Amiriyeh in Central Homs to break through the government forces' positions in the town of Ein al-Dananir but failed and lost at least 15 fighters in clashes with the army soldiers.

A military source said that the Nusra terrorists had planned to open their way to the Northern front of the key town of al-Moshrefeh after capturing Ein al-Dananir.

The Russian Defense Ministry said on Saturday that the Syrian army supported by Russian aviation has destroyed an ISIL stronghold near the city of al-Bab in the Aleppo province.

The Syrian army killed over 650 terrorists and terrorists' hardware in their operation to free the town of Tadif near al-Bab, Sputnik reported.

According to the Russian ministry, Tadif which is located in Aleppo province's North-East was "one of the most fortified strongholds of terrorists near al-Bab."

After liberating Tadif, the Syrian army agreed with Turkey on a demarcation line with Ankara-backed Free Syrian Army opposition fighters.

"As a result of the advance, the Syrian government forces have reached a demarcation line with the Free Syrian Army's units as it had been agreed with the Turkish side," the Defense Ministry added.

Moreover, the Syrian government forces have gained control over a strategic highway leading to Raqqa.

"Daesh [ISIL] fighters in al-Bab used to receive arms and ammunition via the highway leading to Raqqa," the ministry underlined.

Currently, the Syrian army is approaching al-Bab controlled by ISIL from the West and South, while the Turkish-led forces are attempting to advance into and liberate the town from the North and the East.

The Kurdish-led Syrian Democratic Forces (SDF) stormed ISIL's defense lines North of the city of Raqqa and won control over more villages only seven kilometers away from ISIL's self-proclaimed capital.

The SDF purged ISIL terrorists from the villages of Dokhan, Beir Saeed, Moshrefeh (Beir Fezeh, Abu Natali, al-Hadi and Sanineh in the Northeastern countryside of Raqqa.

The Kurdish fighters then engaged in fierce clashes with ISIL and seized control over the village of Ma'eizileh located in the 20km North of Raqqa city.

The SDF also drove ISIL out of the villages of Mleihan and Badra'iyeh in the Northern countryside of Raqqa city and deployed in lands only seven kilometers to the city.

The Kurdish fighters also pushed ISIL back form the regions of Jisr Shanin and al-Aqtan.

Tags: Deir Ezzur Syria ISIL Homs Aleppo Raqqa
Short Link rasanews.ir/201nAL
Share
0
Please type in your comments in English.
The comments that contain insults or libel to individuals, ethnicities, or contradictions with the laws of the country and religious teachings will not be disclosed