Rasa - Leader of the Islamic Revolution Ayatollah Seyed Ali Khamenei described certain big powers’ meddling in the region as the source of regional problems today, saying the US and some European countries have had a role in causing crises in Syria and Iraq. 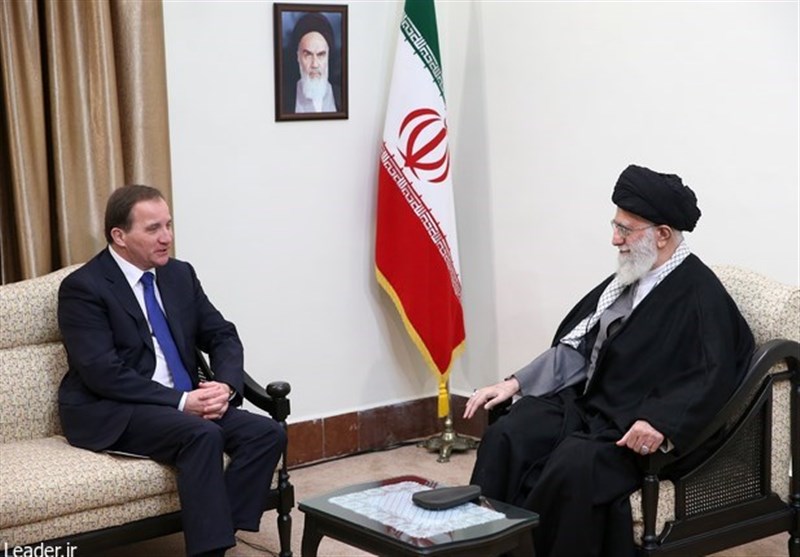 RNA - “The US and many European powers have played a role in bringing about bitter incidents in Syria and Iraq and, knowing this, the people of the region are rightfully distrustful of them,” Ayatollah Khamenei said in a meeting in Tehran on Saturday with Swedish Prime Minister Stefan Lofven.

The Leader referred to the move by some Western countries’ ambassadors to meet with Syria’s opposition groups and “generously providing them with weapons” at the beginning of the Arab country’s conflicts as an example of such foreign interference.

Stressing that the solution to regional problems is in the region, Ayatollah Khamenei highlighted the improvement of the situation in Iraq and said the Syrian issue can also be resolved similarly provided that support for terrorism and warmongering is stopped.

Elsewhere in the meeting, also attended by Iranian President Hassan Rouhani, the Leader described the current level of ties between Iran and Sweden as being below the existing potential, saying Iranians think well of Sweden given its long-standing links with Iran and this positive attitude between nations can pave the way for development of bilateral relations.

Imam Khamenei also referred to Iran’s vote for Sweden’s membership in the United Nations Security Council, saying that the Security Council is a major capacity that, unfortunately, has been crippled by some big powers.

However, the Leader said, playing a constructive role can help to prevent employment of double standards by the council.

The Swedish premier, for his part, described his visit to Iran as significant and historic, and assessed his meetings with Iranian officials as positive.

Lofven also said Sweden joined the UN Security Council to take effective measures and for that reason has supported the stances of member states of the Non-Aligned Movement (NAM) in the council.

Tags: Iran Ayatollah Khamenei
Short Link rasanews.ir/201nA7
Share
0
Please type in your comments in English.
The comments that contain insults or libel to individuals, ethnicities, or contradictions with the laws of the country and religious teachings will not be disclosed